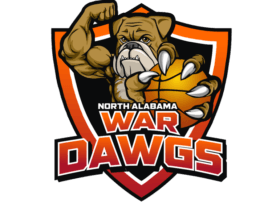 When Timothy Jones moved to Huntsville last October, he found a lot to love about the city. He also saw opportunity.

He saw not only a community with a thriving economy but one with a lively professional sports scene.

And the Rocket City Trash Pandas have taken the area by storm with Minor League Baseball record-setting merchandise sales as professional baseball prepares to make its Tennessee Valley return in 2020.

But, he also noticed there was no pro basketball option for hoops fans.

“I thought it would be a wonderful place to have a basketball team,’’ he said.

Jones soon teamed with Chris Burge as founders and co-owners of the North Alabama War Dawgs. The team will play in the semi-pro American Basketball Association this fall.

Jones is a 1991 graduate of Gadsden High School. He retired from the Navy after 20 years in 2012 and worked for three years at Northrup-Grumman. He “linked up” with Burge, formerly of the minor league basketball Huntsville Force, and decided to give the ABA a try.

“The ABA is a very competitive league,” Jones said. “We’re looking to have a competitive team.”

The co-owners reached out to Force players to form the nucleus of the War Dawgs.

“They didn’t get a lot of press, but they had some great players,” Jones said. “Some of the guys have international experience.”

The ABA bills itself as the largest sports league in the world with more than 100 teams, including one from Japan that plays all games on the road. The league had four teams who played in Alabama last season — the Atlanta Raptors and the Port City Tornados, who both play home games at Vigor High in Prichard; the Magic City Surge, who play out of Birmingham’s Daniel Payne Middle School; and the River Region Generals, who call Montgomery’s True Divine Baptist Church home.

The city touts its community service and work with local youths. Jones said the club has reached out to civic leaders, groups such as the Chamber of Commerce and has developed a close relationship with the Jemison High School administration.

“A lot of people are showing us a lot of love right now,” he said, “But, it will be an uphill battle getting started and finding sponsorships.”

Good Eatin’ Ahead as Huntsville Restaurant Week Kicks Off