Leave it to an electrical engineer to select a math term to name his new business. 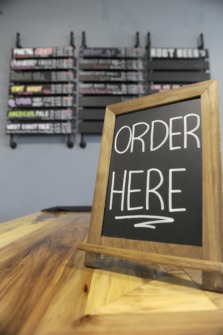 That’s what Larry Lowe did in branding the Fractal Brewing Project, which opened Sept. 18, in the building that once housed local craft micro-breweries Olde Towne and Straight to Ale but has been empty for the past two years.

Fractal, as defined by Random Word, is “a never-ending pattern in mathematics built from repeated shapes that are reduced each time they repeat.”

Sounds cool, even for those of us who have no idea what it means.

Cool also defines the renovated tavern at 3200 Leeman Ferry Road. The look of the place will be somewhat new to former patrons of the site under its old banners — the tap room has been relocated, Lowe brought in wood for tables and tabletops that was locally sourced, two large barn doors separate the tap room from the event area, for instance.

But, Lowe added, while he expects customers to make new memories, he also hopes the vibe the former tenants provided is the same. Olde Towne in the early 2000s and Straight to Ale some five years later were the first breweries in the city since prohibition ended.

“When I was going through the process and told people what I was doing, their eyes would sparkle and they’d say,’ You know, I met my husband there,’ or, ‘I had my baby shower there,’ or ‘I had my brother’s funeral (wake) there.’ There were so many good memories in this building and it was such a community place. That’s what I wanted to do. Give everybody a new experience but preserve the character of the old place.”

Lowe spent 22 years in the defense industry after graduating Grissom (Class of ‘93) and then Auburn (MS in ‘99, Ph.D. ‘01). He served as vice president at Huntsville’s GATR Technologies and was part of the executive team that put inflatable SATCOM antennas on the market.

Cubic Corporation bought GATR in 2016. Lowe said he “hung around for three years during the transition” but wanted to move on to something different. He had served as vice president at GATR under Paul Gierow, the president, and wanted to be in charge of his own business. 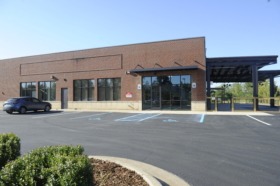 “I was itching to try to do something else,” he said. “Watching Paul run the company, I was just kind of riding shotgun watching Paul make all the decisions. I had the itch to see if I could run my own business and being the one to call all of the shots.”

Professional brewer and retired Marine Brad “Robo’’ Robinson is on board after stints as brewmaster at four sites, including two in town. Tap room manager is veteran Justin Wenz. Fractal has event space, a catering staging area and is wired for conferences and live music.

Lowe said his staff is capable, allowing him to spend some time with wife Amanda and their three children. That doesn’t mean he won’t been seen at his new “Project.”

“I never found that you could be creative in your cubicle or the board room,” Lowe said. “Those aren’t creating meetings. I found the most creating environments were places like breweries where people gather and dig into the next problems and minds get creative.”