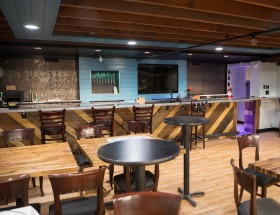 A warm atmosphere awaits the customers to BeeZr. (Photo/Steve Babin)

BeeZr Gastropub + Social Exchange is the latest establishment settling on Northside Square in downtown Huntsville that gives the block a European vibe.

BeeZr is a play off “beezer,’ which is British slang for “excellent.’’ BeeZr, in the building that formerly housed Club Rush and Jazz Factory, counts as its neighbors English pub The Poppy and German-influenced eatery Domaine South.

Ron Jewell, founder and business development director of BeeZr, said he and his team “found the perfect location in the booming downtown arts and entertainment district in Huntsville. A historic multi-story building situated centrally on the courthouse square.’’ 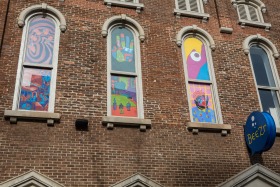 The building’s windows are eye-catching with canvas psychedelic paintings viewable from Clinton Avenue between Northside Square and the courthouse.

“Clever architects, engineers, a visionary brewery designer, and construction experts produced a minimal-footprint, tall-stacked, custom-designed brewery configuration that will support up to 25 different recipes fermenting simultaneously,’’ said Jewell, who has a background in aerospace and engineering software and hardware.

Chandler’s Ford Brewing is named for English neighborhood Hampshire, where Jewell lived in his early teens.

As for the brewery, Jewell describes the focus as on “fresh, delicious beer recipes delivering a bewildering variety of fermented beverages and will be complemented with a selection of champagnes, wines, and specialty mixed drinks.’’ 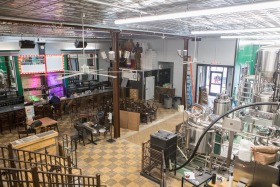 “We dreamed of a uniquely-motivated small restaurant where tapas-sized portions of decidedly different interpretations of our favorite foods are prepared flawlessly and precisely every time: tacos, pizzas, steak sandwiches, crab cakes, gumbo, charbroiled beefsteak, rack of lamb, charcuterie,” he said.

“We dreamed of a uniquely configured small-batch brewery capable of creating a large variety of ales and lagers, and served direct to tap without the degradation that accompanies every type of retail packaging. IPAs, barrel-aged stouts, kettle sours, mixed fermentation experimentals, and an extensive lagering program.

“We dreamed of a cool, comfortable, cavernous venue with a mixture of old and new, metal and wood, art & architecture, and music and food and beer. Austere and sublime and perfectly situated in the Huntsville downtown area.