The Huntsville-Madison County 911 Center has launched a text-to-911 service, providing a significant step forward in accessibility to those who are unable to dial 911. The center has served Huntsville, Madison, and Madison County since 1992. 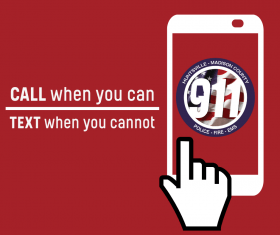 This service, offered in conjunction with the Alabama 911 Board and its network provider, INdigital, is available to those who have cellular service with Verizon, AT&T, T-Mobile, SouthernLINC, or Sprint.
Text-to-911 should be considered a secondary option only to dialing 911 from a cellular or landline phone and should be limited to the following circumstances:
This service also allows the center to respond to text messages to not only confirm if an emergency response is needed but to also confirm whether or not an accidental call to 911 was made.
“Text-to-911 provides another layer of service that will greatly enhance safety for the community we serve,” said Chris Tucker, Chief Operating Officer & 911 director. “Although recommended as the second option for contacting 911, text messaging is one of the primary ways people communicate today; by having this option we’re able to ensure anyone who may not be able to dial our team receives emergency service when and where they need it.”
Major advancements for HMC 9-1-1 have been a focal point for several years, especially since the center is the largest and most advanced emergency operations center in the state. Recently moving into its new 30,000 square foot facility, the center has aligned its growth ahead of the expanding population and is currently home to eight agencies.
“Having the ability to send text messages to 911 is a gamechanger for the deaf community,” said Frances Smallwood, president and founder of Deaf Access Inc. “Those who are deaf or hard of hearing struggle with things that we often take for granted; having direct and easy access to emergency personnel when it could be a matter of life or death is paramount, and something that can potentially save lives.”