McLain seeks out opportunities to contribute time and leadership

Scott McLain is a member of the Huntsville community who believes in contributing his time and working hard on initiatives to make Huntsville a better place. Although busy with a lively commercial real estate brokerage and management business, McLain also is active in the community, state, and nation on a great many boards, foundations, and councils.

HBJ: Are you a native of Huntsville?

SM: I call myself a “native by memory,” meaning I don’t remember living anywhere else. I was born in Montgomery when my father was in the Air Force Reserve, just before he attended the University of Alabama Law School. My parents moved to Huntsville in 1959 where my mother taught school and ultimately became assistant administrator at Huntsville Hospital and later mayor of Mooresville. My late father, Gene McLain practiced law for more than a decade, then served in the Alabama House of Representatives and Senate before running for governor in 1974. He started a commercial real estate business the same year.

HBJ: What is your educational background?

In 1974, I joined my father in what is now Coldwell Banker Commercial McLain Real Estate, full service commercial real estate firm. After a number of years, however, I longed to be in the classroom again and completed the Harvard University Graduate School of Design Advanced Management Development Program. I also served on the Alumni Council there for nine years.

HBJ: What philanthropic projects are dear to you and why?

SM: After joining my father, I started an active volunteer career as well. I have taken this service to heart and have served on nearly seventy boards since returning to Huntsville from law school, serving as chair of many of them.

I am proud to have served on each board, but my education service is especially important to me – having served as a long-time member and former chair of The Schools Foundation and also as founding member of the A+ Foundation, a statewide education support organization. I am an education junkie, I guess. Any problem we face, we can address with education. Education is the answer to every problem.

I have also enjoyed service on the Museum Board of the City of Huntsville, where I served as chair of the board when the new museum was built in Big Spring Park. At the time the location of the building was somewhat controversial but as an urban planner by study, I helped the community understand that a museum is about the only building that a community should put in a park. The Museum is now a focal point for activities in Big Spring Park.

I enjoy statewide service as board member of PARCA, the Public Affairs Research Council of Alabama, the state’s only good government think tank. Leadership Alabama is also important. I have been enthusiastic for the program, and am a graduate of Class 1, and served on the board several times since.

There are dozens of other board and committees, including charitable and health and community and education and leadership, on which I serve or have served. These efforts are not at the expense of time or a diversion from family or work, but rather are rich opportunities to contribute time, funds, and leadership to ensure that Huntsville is the great community in which we all want to live. I am honored when I serve on a board. That board is inviting me to share my skills and knowledge and leadership for its important mission. My time and energy there are worthy ways for me to help and sustain our community. Huntsville is better when we all contribute to the causes that are so important to this community.

I have no intention of retiring from this service any time soon. I have more than once put myself in “time out” for a year so that I can return to serve fresh tenure and start the process again.

HBJ: Tell about your family.

SM: I have been married to Yolanda McLain for twenty years and between us we have six children. All adults now, five daughters remain living and proudly serve in volunteer capacities in their circles. We live in southeast Huntsville. 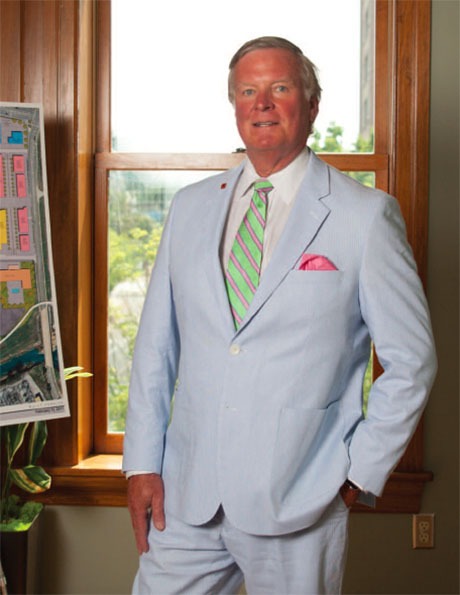