It’s funny how when you only spend six out of 15 daylight hours a day at home, you don’t notice that lumpy sofa, weeds growing in the flower pot or how much better that movie would have been on a wide screen TV.

But staying at home 24 hours a day for days, weeks, growing into months on end with no TV sports or outside entertainment, and everyone’s alter ego rises to the occasion … taskmaster, contractor, landscaper, housekeeper … everyone turns into Lucy & Ethel paperhangers! Who knew there was so much to do around the house!

According to Statista, a company that provides insights into some 170 industries worldwide, reported in August that U.S. retail sales saw a sharp rebound in May and continued to recover in June and July from the historic slump brought about by the COVID-19 pandemic. 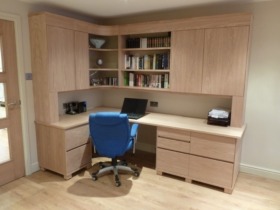 Furniture retailers have seen an uptick in sales during the pandemic, especially home-office furniture.

Estimates from the U.S. Census Bureau show total retail and food services sales amounted to $536 billion in July, up 1.2 percent over June and 2.7 percent over last year’s July figure. That follows an 8.4 percent month-over-month increase in June and that latest increase puts retail sales back on its pre-pandemic trajectory.

According to housewares industry news source Homeworld Business, the COVID-19 pandemic has had a profound effect on the mass-market furniture business and that continues to drive unprecedented sales.

Charlie Swearingen with Lily Flagg Furniture said sales have increased significantly since the store reopened in May after an eight-week closure from mid-March through April.

“Our problem now is getting furniture in from the manufacturers,” he said. “We have our own warehousing so our customers have always known they can buy right off the floor and we can quickly restock from our warehouse.

“But sales have been so good, we have sold and replenished most of what we usually have in the warehouse and manufacturers are telling us it will be three to six months before we will get certain items from them. Customers don’t want to wait that long.”

Miranda Jackson has been with Huntsville’s La-Z-Boy Furniture Gallery for 15 years and she said they are facing the same dilemma.

“We were only closed for about four weeks in April, but we have seen a tremendous upsurge in living room and dining room furniture and rockers,” she said. “Now we are low on stock on a lot of popular items and out of stock on rockers, which is one of our best-selling items.”

She said their rocker manufacturer has resumed production, but they are backlogged so they are telling stores to expect a minimum 110-day wait.

Swearingen says during normal times, three factors drive furniture sales: building or buying a new house, downsizing, and the desire for change. But he believes staying at home and stimulus checks have driven some of the pandemic upsurge.

According to Homeworld Business, the office furniture market is set to grow by $22.32 billion during the 2019 to 2023 period, progressing at a compound annual growth rate of almost 6 percent during the forecast period.

“Electronics and appliances were deemed essential, so we did not close, however the big box names did close or had limited hours and access based on blanket corporate decisions,” he said. “That was excellent for us as a small business and a lot of people who did not know we are here have become regular customers.” 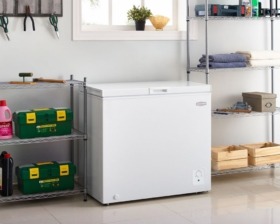 Sales of home freezers have been “phenomenal.”

He said computer and home freezer sales have been phenomenal.

“People realized their home computers were not sufficient for what they needed to work at home,” Thomas said. “Between that and kids needing computers for home schooling, we have sold more computers and home freezers in the months since the pandemic than we have sold since we opened.”

“In the early days of the pandemic, people were worried about food shortages, so they were buying up a lot of meat and frozen foods and needing freezers in which to store it,” Thomas said. “We sold freezers to people who has never had a freezer before.”

According to the National Retail Federation, just over half of retail categories saw month-over-month gains and three-quarters saw year-over-year increases with electronics and appliance stores up 22.9 percent month-over-month seasonally adjusted.

The numbers coincide with what Thomas reported locally.

The biggest monthly gain came at electronics and appliance stores, which are selling more computers for home offices and online learning, along with more appliances associated with home improvement spending and higher home sales.

Another area where Huntsville retailers are reporting high pandemic sales is in lawn, gardening, and landscaping. 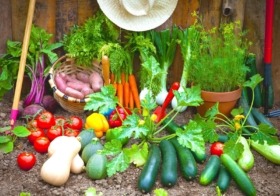 Home gardens have seen a surge during the pandemic.

Randy Cobbler, store manager for TriGreen Equipment, said home mowers and trimmers have been big sellers during the pandemic but it may be surprising to hear that hand-held tillers are far and away in the greatest demand. So much, Cobbler said, the store has run out its stock and can’t find any available with surrounding dealers, either.

“There is nothing like a pandemic to make people start thinking about the food supply and food shortages,” said Cobbler. “Farm-grown food would be essential in that case and a lot of people started planting vegetable gardens, some for the first time. A tiller is essential to planting vegetables and we have a lot of people, especially ladies, calling us because they discovered they need one.”

The NRF sales figures differ from Census Bureau figures because they exclude automotive, gasoline stations and restaurants to focus more on core retail. Those retail figures showed July up 1 percent seasonally adjusted from June, but the July numbers showed a trend. The numbers were up 7.1 percent unadjusted year-over-year on a three-month moving average and up 4.7 percent for the first seven months of the year.

What are the blues for consumers can be good news for retailers!