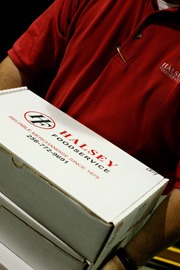 Halsey will be the exclusive provider of food and food service products for the Rocket City Trash Pandas stadium. (Photo/Halsey Foodservice)

With the agreement, Halsey Foodservice will be the exclusive provider of food and food service products for the Trash Pandas’ stadium, which opens in 2020.

“We are excited and honored to have Halsey Foodservice, headquartered in Madison, join the Trash Pandas family,” said team President and CEO Ralph Nelson. “Not only is Halsey Foodservice synonymous with quality products and superb customer service, but Halsey is one of the most iconic names in North Alabama’s rich history of growth and community service.

“This partnership will go a long way toward our well-documented goal of making the Trash Pandas’ food and beverage program second-to-none in Minor League Baseball.”

As part of the agreement, Halsey Foodservice has been named a Founding Partner of the Trash Pandas and the new stadium.

The 140-year-old company will be the sponsor of the new stadium’s William L. Halsey Suite Level which will feature a timeline chronicling the company’s history throughout the suite corridor. The W.L. Halsey logo will be prominently displayed at the front of the suite level, as well as on the stadium’s video board in right field.

“Halsey Foodservice is proud to be a part of this latest expansion for Huntsville, Madison, and the surrounding area,” said Owner, President and CEO Cecilia Halsey. “My family and, particularly, my father have long been committed to the growth and success of the Huntsville area from fundraising for the UAH campus, Redstone Arsenal, and his early involvement with the space program. My father’s love for this community has been evident and long-lasting.

“I am committed to carrying on my father’s legacy of community involvement and what better way than to form a strategic partnership with BallCorps and the Rocket City Trash Pandas. The Trash Pandas will be a central catalyst in bringing the community and its people closer together.”

The Trash Pandas will open their inaugural season next year with their home debut set for April 15.