Phat Sammy’s opening day was March 18, right when COVID-19 was taking the world by storm. 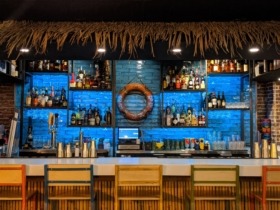 As people were grimly preparing for the inevitable shutdown, Phat Sammy’s four owners braced for the uncertainty.

Adaptability just happens to be one of their core competencies. With 3 1/2 years of operating as a traveling pop-up dining experience, Team Phat was already adept at quickly shifting gears and adjusting to the unexpected. They just rolled with the punches and have kept rolling.

Phat Sammy’s location at 104 Jefferson Street is not super obvious.

At street level, there’s nothing to see, nothing giving it away. No signs. The windows are heavily tinted and there’s a doorbell; something that was installed during the pandemic and is likely here to stay. If you walk past it, you’re liable to collide into the ever-popular official “bird” of downtown Huntsville, the crane. Construction is everywhere and red clay footprints smudge the sidewalk in front of the building.

A hint that coolness lurks in the midst is provided by the large metal pineapple just above the entrance. Almost glass-like, this exquisite gem by Micah Gregg at Drop Metal is backlit at night by green LEDs, thus creating an aura of the exotic.

Once downstairs at basement level, that’s where the magic happens. Adorning a long stretch of wall is a bright, colorful mural by local artist Logan Tanner. And there’s an iconic, grass-edged Tiki bar.

The food and beverages are as colorful as they are tasty. It’s like a Polynesian getaway – right in the heart of downtown. 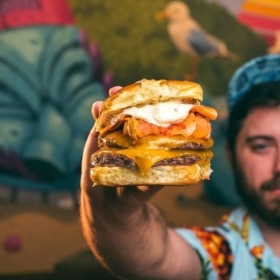 The K-Mac is an international festival of flavor on a bun.

Historically, the Tiki concept is laced with mystery and romanticism, conjuring imagery of the exotic and lands far away. In 1933, Don’s Beachcomber, a Polynesian-themed bar and restaurant In Hollywood, Calif., officially ushered in what we commonly refer to as Tiki culture.

Phat Sammy’s is a delightful combination of modern Tiki Bar meets Eastern Asia inspiration. The entrees and cocktails go far beyond the everyday, with menu items such as the “K-Mac,” a double cheeseburger with kimchi bacon and egg on a Canadian bacon brioche bun.

Drinks with tongue-in-cheek names such as “Not a Painkiller,” “Sammy’s Pet Flamingo” and “Jungle Bird” are served up in fancy Tiki-inspired mugs, complete with flowers, fresh fruit, and a cocktail umbrella.

There’s a sign on the wall that sums it up: “For us, Tiki means no limits. Our creativity is allowed to grow under an umbrella of culture that craves for experimentation of flavor. Tiki creates an experience where you get to escape the fast-pace lives we live to kick back, grab a cocktail, and just chill.”