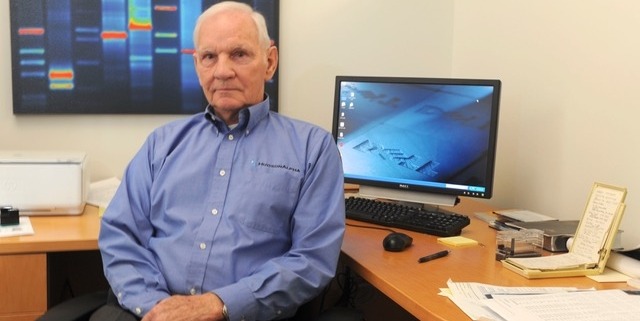 The team at the HudsonAlpha Institute for Biotechnology mourns the passing of an inspirational leader, Lonnie McMillian, the co-founder and chairman emeritus of the Institute.

McMillian died Sunday. He was 90.

McMillian was a founder of Adtran, a leading global provider of networking and communications equipment. When he retired from the company in 2001, he worked with longtime friend Jim Hudson to create HudsonAlpha.

The pair set out to develop a unique vision — a nonprofit institute that could combine the power of academic research with the resources of the commercial sector to bring discoveries to market quicker.

Their focus was to deliver better medical care to people everywhere. McMillian and Hudson’s belief in the Institute and their devotion to its success have impacted countless lives the world over, through advancements in diagnosis, treatment and our fundamental understanding of the genome.

“Lonnie was so deeply humble,” Hudson said of his friend, “that not many people have a true scope of how much he gave to the world. The institute is only one example, and I feel blessed for the opportunity to have worked on it with him.

“He will be dearly missed.”

McMillian was a generous philanthropist, and he lived out his commitment to improving the human condition through support of educational, scientific and other charitable causes. Many of his gifts will never be recognized due to his desire for anonymity.

“He was an innovator,” said Dr. Rick Myers, president of HudsonAlpha. “Lonnie was a visionary and a gift to all of us that knew him — and many more who were impacted by his generosity without ever realizing it. We have our work cut out for us to live up to his legacy.”