Keith Yager is head brewer at Yellowhammer Brewing in Huntsville. Beginning his craft as a home brewer, his extensive experience, along with tips and advice from friends in the industry, prepared him for commercial brewing. Yager was named Brewmaster of the Year in 2016 by a panel of BJCP certified judges at the inaugural Alabama State Beer Championship.

HBJ: How does one become a brew master? What does it entail?

KY: I am a self-taught brewer. In 1996 my mother got me a home brewing kit for Christmas and I was hooked. I wanted to learn everything there was to know about brewing and read everything I could find on crafting beer. At one point I was home brewing much faster than the beer could be consumed. I was more interested in developing recipes and processes than I was in drinking every batch of beer, although, no worries there, plenty of beer was consumed.

In 2008 I was approached by some friends about opening a small brewery in Huntsville and I decided to make the leap. When you make the jump from home brewing to commercial brewing the difference can be daunting. As a commercial brewer you are essentially running a factory which involves learning about equipment and industrial processes. I found this new challenge to be extremely rewarding and an interesting new focus.

KY: Campus 805 is a great place to hang out. You are within walking distance of three great local breweries, Yellowhammer, Salty Nut, and Straight To Ale. I’m obviously partial to Yellowhammer tap room because of our great customers, many of which I have become friends with, and of course for our award winning beer. I also love to hang out at Salty Nut beer garden since Salty Nut Brewery was our original location and we built that beer garden. Straight to Ale has a great tap room too and a good selection of food. While there are obvious friendly rivalries between the three breweries we all get along very well and enjoy visiting each other’s breweries.

KY: Steely Dan, but I have to admit I saw Earth, Wind and Fire at the VBC a couple years ago and was blown away at how great they were. Philip Bailey can play every musical instrument known to man, apparently, and his voice sounds as good as it did in the 70’s. It was pretty incredible.

HBJ: Where would you travel if you could go anywhere?

KY: I would love to tour all the Trappist breweries in Belgium, the Netherlands, Austria and Italy. I am fascinated by Trappist brewing tradition and I love their beers and brewing techniques. 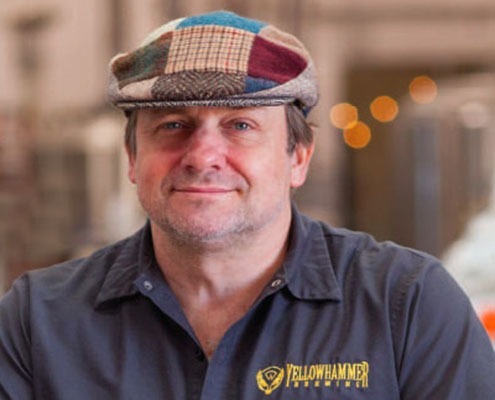