GADSDEN — After taking it on the chin for most of 2020 due to the COVID-19 pandemic, North Alabama’s $3 billion tourism industry found plenty of good reasons to celebrate at the Alabama Mountain Lakes Association’s 2020 PEAK Awards. 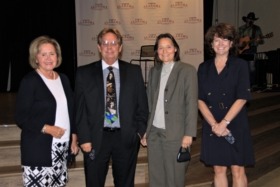 Presented as part of the AMLA Annual Meeting in Gadsden, the awards recognized 11 North Alabama hospitality industry professionals and venues for their leadership despite extraordinary challenges that threatened to devastate the North Alabama tourism industry.

Five of the 11 awards went to venues based in Huntsville – including one of three President’s Awards.

Jana Kuner, public relations and customer service manager at Huntsville International Airport, received a President’s Award, presented to any person or organization whose tourism-related project created awareness or presented a positive image for North Alabama in the past year. Kuner’s role in helping stop a human trafficking incident at the airport this year earned her the recognition.

“We were honored to receive the President’s Award from Alabama Mountain Lakes Tourism this year,” said Kuner. “Even more than that, we are pleased to be able to shed more light on human trafficking and to hopefully be able to continue to make a difference by keeping our passengers safe.”

“The Peak Awards showcase the work, service, creativity and contributions of those who are leading the way in the North Alabama tourism industry,” said Alabama Mountain Lakes Tourist Association President/CEO Tami Reist. “With the COVID-19 pandemic still looming, it has been and continues to be a challenging year for the tourism industry. This year’s winners have demonstrated a commitment … to showcase the best of North Alabama during these unprecedented times. It is a well-deserved win for each of the recipients.”

Awarded Organization of the Year, the Land Trust of North Alabama was recognized for opening its eighth nature preserve – Bethel Spring Nature Preserve in February, offering new trails for the community and visitors to explore.

“Land Trust of North Alabama was thrilled to be recognized by Alabama Mountain Lakes Tourist Association as Organization of the Year,” said Marie Bostick, the Land Trust’s Executive Director. “North Alabama has a wealth of natural beauty and throughout this unusual and challenging year we were reminded how beneficial and rejuvenating those spaces can be.”

The Apollo 50th Anniversary Celebration at the U.S. Space & Rocket Center, a multimonth series of events that culminated the week of the Apollo 11 mission was named Event of the Year.

“We are honored the Alabama Mountain Lakes Association selected the Apollo 50th Anniversary Celebration for its event of the year award,” said Pat Ammons, senior director of communications for the center. “Two years of planning went into the events that brought people from all over the world to Huntsville to celebrate Alabama’s role in putting Americans on the moon.

“It was thrilling to be able to share those accomplishments with so many.” 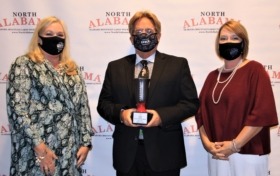 Pete Doyle, general manager of the Holiday Inn Research Park, an anchor in Huntsville’s MidCity development, brought home the Tourism Professional of the Year award. He moved to Huntsville from Nashville in 1990 to manage the former Holiday Inn Space Center on University Drive and took the helm at the larger Research Park property in 2000. He led the 195-room hotel property through a newly completed $4.5 million renovation.

“I am quite honored to be recognized in an industry that has been my life is very humbling and appreciated,” Doyle said. “In over 30 years of work here in Huntsville, I have witnessed massive growth to our community that seems at warp speed now. That makes it a very exciting time and it has always been my pleasure to assist and give my input when asked by either our Convention and Visitors Bureau, Von Braun Center, Chamber of Commerce or City Hall to improve our stature.” 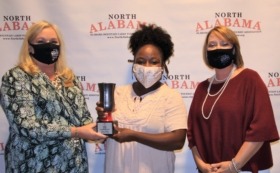 Zenovia Stephens of Black Adventure Crew was named Top North Alabama Ambassador of the Year. Originally from Chicago, Zenovia and her husband’s love for exploring North Alabama with their sons and finding creative ways to be adventurous at home, have her active in the community. She serves as a board member for Chaffee Elementary School PTA and a volunteer at the Southeast YMCA.

“I’m honored that my work in promoting the adventure and beauty of Alabama, and the need to diversify the great outdoors has been recognized,” Stephens said. “I’m looking forward to continuing to showcase all our state and lead in helping to change the outdoors narrative.”

AMLA is dedicated to the promotion and development of the travel industry in the 16 counties that make up the North Alabama tourism region. The membership consists of chambers of commerce, convention and visitors bureaus, attractions, campgrounds, festivals, communities, counties, golf courses, restaurants, tour operators, accommodations, vendors, financial institutions, and individuals.

There were two additional President’s Award winners: Hilda Smith, director of sales and events for the Hampton Inn by Hilton in Winfield, and Mindy Hanan, president/CEO of the Alabama Restaurant and Hospitality Association.