MADISON — Some small businesses aren’t going to make it, but those who do are vowing to hunker down and do what it takes to survive.

That was the overall sentiment coming from small business owners, state and local government officials, and members of the Tennessee Valley Republican Club as they gathered Saturday morning at Earth and Stone Wood Fired Pizza in Madison.

Sharing coffee, donuts, music and fist bumps instead of handshakes, the meeting was a mixture of rallying cry behind small business, common reassurances, the medical perspective, politics, a sharing of best practices, and a call to find flexible alternatives and solutions that will get each other through the days ahead in the wake of the COVID-19 crisis.

There was one common theme however – COVID-19 may stymie growth and delay the opening of new stores and restaurants, but local businesses are used to delays … the weather and labor shortages have held up roadwork, traffic and construction all over the county for the past 10 years.

And if fits and starts and problems and delays – as frustrating as they may be – dispirited the Rocket City, then Watercress Capital of the World would still be Huntsville’s claim to fame!

Stan Stinson of Earth and Stone Wood Fired Pizza in Huntsville and Madison; and Dan Perry of Straight to Ale are experiencing new meanings to the idea that entrepreneurs are willing to take risks – even those that are unforeseeable.

And Perry is no stranger to hard fights.

The engineer started his Straight to Ale Brewery in 2009 after the “Free the Hops” grassroots nonprofit organization succeeded in increasing the alcohol by volume (ABV) limit in beer from 6 percent to 13.9 percent. That, in itself, took an “act of Congress”, but the disruption caused by COVID-19 offers new challenges to his expanded 55,000 square-foot facility at Campus 805.

Stinson said there will be some businesses that do not survive it, but he does not intend to be one of them. That doesn’t mean however, he won’t take a hit.

He rushed to get his new Self Serve Drinkery open in time for the annual St. Patrick’s Day Parade in downtown Huntsville. However, the annual celebration was, itself, a casualty of COVID-19.

“I estimate I lost $7,000 in business at the downtown location of Earth and Stone (last) Saturday when the parade shut down,” he said. “And probably at least $2,000 at the Self Serve Drinkery. But who really knows, it being our first day open.

“To give you some perspective, Earth and Stone Wood Fired Pizza opens on parade day at 8 a.m. because people begin celebrating that early, and we are usually packed. At noon this Saturday, we had our first two customers.”

Stinson was also looking to open two additional restaurants this month: the Bark & Barrel BBQ on County Line Road in Madison and a new eatery at the Stovehouse.

“We will be meeting this week to discuss the way forward,” he said. 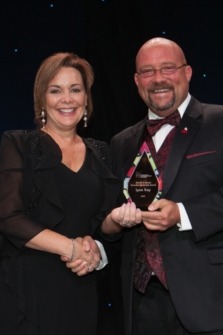 Amidst a gala “Masquerade Ball” atmosphere of a masked audience in formal attire, the Huntsville Madison County Chamber celebrated the city’s entrepreneurial community in the 33rd annual Small Business Awards.

Gary Bolton, the Chamber board chair and vice president of global marketing for Adtran, welcomed the crowd to Tuesday night’s affair. Hank Isenberg, Chamber vice president, small business and events, and Haley Baker of WAFF-TV were the emcees.

“We are celebrating the most successful” small businesses, Bolton said.

“We received 650 nominations and there are 155 contenders,” he said. “There are 1,100 people here” … in the soldout event held in the Von Braun Center’s North Hall.

A new category debuted, saluting the area’s booming growth – Local “Creative” of the Year. It was won by Pizzelle’s Confections.