Balloons dropped over the ticket counters at Huntsville International Airport after USA Today announced HSV was named the No. 1 Small Airport in the U.S.

USA Today’s 10Best.com announced in December that HSV was among the final 10 to be nominated. The airport began an online voting effort asking visitors to vote often and share the link.

Tucker directed his thanks to the community since it was their votes that clearly put HSV over the top.

“Congratulations for making Huntsville International Airport the number one small airport in the U.S.,” Tucker said to thunderous applause. “We are ecstatic that HSV has been chosen by voters as North America’s best small airport for USA Today‘s 10 Best Readers’ Choice awards. 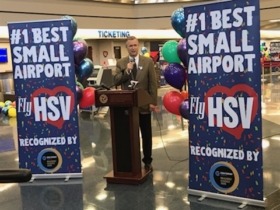 Rick Tucker, CEO of Huntsville International Airport: “We are so grateful to the community for supporting HSV by voting.” (Photo/Kimberly Ballard)

“This was definitely a team effort and we worked each and every day to provide excellent service to passengers, but we also work to represent this region well so that a visitor’s experience will reflect positively on the state of Alabama as whole.

“We are so grateful to our community for supporting HSV by voting. We share this honor with them and will continue to work hard to provide North Alabama and Southern Tennessee residents with even more great options at their local airport.”

According to Jana Kuner, public relations manager for the airport, celebratory parties are planned around the Tennessee Valley to thank businesses and residents for voting.

“We will host a party that is free to the public at the new Mars Music Hall in Downtown Huntsville on Saturday, March 7, from 7-10 p.m.,” she said. “The party will feature local cover band Juice and will serve to kick off a series of celebratory events throughout 2020.”

Kuner said the “pop-up” parties will be held across North Alabama, “Since we are a regional airport, we want to celebrate this designation with all of our passengers.”

For information on the HSV Kick-Off Celebration Party in March and the other HSV pop-up parties, visit  FlyHuntsville.com, the airport’s Facebook page and Twitter @FlyHSV.

Based on current voting tallies, Huntsville International Airport is in second place in the USA Today 10 Best Reader’s Choice 2020 Small Airports in the U.S. – and voters have through Jan. 13 to help Huntsville pull out a win.

You can vote daily: https://www.10best.com/awards/travel/best-small-airport/huntsville-international-airport-huntsville-ala/ and are encouraged to share the voting link via social media as often and with as many people as possible.

Jana Kuner, public relations manager at Huntsville International Airport, said there are more reasons to vote than just showing support for the airport – it can draw the attention of more potential carriers, and make pricing more competitive, resulting in lower fares

“This vote is really more about getting the attention of the airlines that we are working with each and every day,” said Kuner. “It’s important for customers to know the airport doesn’t set the fares. The airlines charge what the market will bear and we have seen fares continue to become more competitive over the last few years due to new carriers joining our market like Frontier.

“If you want to help us attract even more new carriers like Southwest Airlines, then voting for us as the number one small airport in the U.S. will make the airlines take notice. Our Air Service Development team will continue to work with existing and new carriers to encourage them to bring more service and competition to the market.”

Twenty small airports across the U.S. have been nominated for the award and voting has been going on for nearly four weeks.

USA Today’s 10Best.com averages 5 million visitors per month and provides a variety of travel content, top attractions, things to see and do, and restaurants for the top destinations in the U.S. and around the world.

It’s all about turning out the vote – not for elected office, but for choosing Huntsville International Airport as the Best Small Airport in the United States.

Historically popular with business travelers and more recently with vacation travelers because it is small and easy to navigate, Huntsville International Airport has been nominated by USA Today as one of its 10 Best Reader’s Choice 2020 Small Airports in the U.S.

Through Jan. 13, visit https://www.10best.com/awards/travel/best-small-airport/huntsville-international-airport-huntsville-ala/ to cast your vote.

Twenty small airports across the U.S. have been nominated by a panel of travel experts, including editors at USA Today. HSV is the only airport from Alabama nominated. The top 10 will be announced Jan. 17.

The voting is digital at USA Today’s standalone travel website, 10Best.com. Voters can vote daily and are encouraged to share the voting link via social media as often and with as many people as you wish.

“We want to show the rest of the country that there is a great airport in North Alabama, and we want to draw attention to our region as a whole,” said Jana Kuner, public relations manager at Huntsville International Airport. “HSV is proud to be a part of this community. We serve the best of the best in the country with folks flying in and out every day … Our community continuing to be nominated for honors like this proves that we have something very special here.”

The airport has an onsite hotel and a range of food and beverage options.

“Huntsville International Airport has typically been known as primarily a business airport connecting our region to the world,” said Katie Martz, the airport’s business development specialist. “With the addition of ultra, low-cost carrier Frontier Airlines starting non-stop service to Orlando and Denver last year, leisure travel from Huntsville has become more affordable and has been growing as well.

“HSV has seen 22 consecutive months of passenger growth, with 19 of those boasting double-digit increases. This has also resulted in fares that are much more competitive. We are grateful for our community’s support and attribute our recent success to them,” she said.

USA Today’s 10Best.com averages 5 million visitors per month and provides a variety of travel content, top attractions, things to see and do, and restaurants for the top destinations in the U.S. and around the world.