After 2 1/2 years and snail’s-pace stop-and-go traffic, the ribbon was cut today for the South Parkway overpasses at Byrd Spring and Lily Flagg roads.

“We’re happy today to be able to open this stretch of South Memorial Parkway,” said Tommy Harris of the Alabama Department of Transportation, that came in a year ahead of schedule.

A ribbon-cutting ceremony was held atop the Byrd Spring Road overpass and it was attended by Gov. Kaye Ivey, Mayor Tommy Battle and other state and local officials. 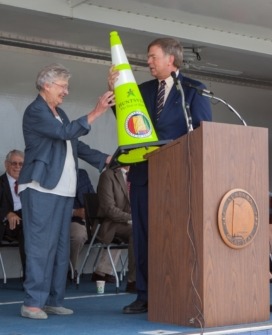 And it also enables the city to “keep the magic 18-minute commute,” Battle said.

“This is the largest project in the city of Huntsville, totaling $250 million,” Ivey said. “When we work together, we can make infrastructure and economic improvements.”

Battle also recognized the teamwork among state and local government and presented a highway cone commemorating the “Restore Our Roads Project No. 2” to Ivey.

“This road system is probably the best example of governments working together,” he said. “This effort enables our community to grow.

“This is a great day for our city.”

David Harris, vice president of Reed Contracting and representing the joint-venture team with Miller & Miller, was appreciative of the patience shown by merchants, motorists and residents.

And he offered some welcome news.

“I thank all the business owners, residents and travelling public for your patience,” he said. “By the end of the day, traffic should be flowing.”