(Editor’s Note: “Sitdown With Success” is a monthly feature spotlighting local entrepreneurs and their keys to success and tips for future entrepreneurs) 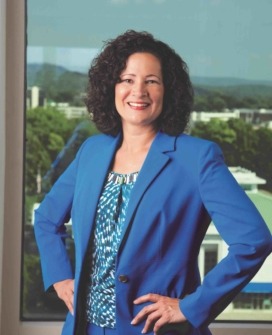 As a Native American aerospace engineer, small business owner, community leader, and family-focused female, Cummings is at the forefront of Huntsville’s path to the future.

And although she has encountered many challenges along the way, she maintains that those challenges have been the driving force for her determination.

Cummings Aerospace, her grassroots creation, is on the cusp of its 11th anniversary, and we caught up with Cummings to gain some inside into her entrepreneurial success.

Tell us about your background and how you chose aerospace engineering as a career.

I grew up in the Lumbee Tribe of Indians in Pembroke, N.C. I always loved math and science. I had a few mentors in the military who I looked up to, and at one point, I was honestly very focused on joining the Air Force after high school. The recruiter said “we’d love to have you, but we need nurses not pilots” and that ended my dreams of joining the military. But I chose the aerospace path instead because it would allow me the opportunity to pursue working on systems while allowing me to be near aircraft and leverage what I was good at academically.

What initial challenges did you face?

I graduated from the University of Maryland with a degree in aerospace engineering. All throughout college, there were maybe three other girls in my graduating class for aerospace, so I definitely chose a field that was male-dominated. I had to figure out how to operate successfully in that domain. I’m from a large family of many brothers and sisters, so building relationships was a natural capability for me. But there is a difference when you are competing academically.

I also didn’t have much outside exposure culturally, so going to a university that was amassed in culture and diversity was in itself a tremendous challenge. But I was driven, and I wanted to succeed and make my family proud. I was a minority but I didn’t allow it to deter me. I used it as fuel for the fire in my belly. I was still in a male dominated force and constantly having to prove myself. As women, we just have to work harder to get recognized.

Once you graduated, how did you begin your career?

I began my career with the Naval Research Laboratory in Washington, D.C., as a government civilian.

After nine years of working for the Navy, I transitioned to becoming a contractor for the Missile Defense Agency, and that’s where my connection to Huntsville began – this was the early stages of BRAC.

In 2005, I helped the Kinetic Energy Interceptor Program and I was responsible for helping the government transition the work force. What was supposed to be a six-month assignment turned into Huntsville into being my home.

Tell us about the origin of Cummings Aerospace and what makes you different as an engineering firm.

I decided in 2009 to break out on my own, largely because of the community’s support of small business start-ups. There were lots of advisors in the community who were encouraging me to start my own company.

Our goal at Cummings Aerospace is technical excellence. Being in the engineering domain is very competitive. We can’t do everything all the time, so what we do, we know we have to do very well. Our reputation resides on it. Quality is very, very important to us. But it’s also much more than that. One of the glorious things about being a small business is that we get the opportunity to be a family and to learn about each other and the family we have created.

What does a successful future look like for you?

I’m probably a little different in that I measure success on the capability we are carrying to the war fighters. How are we contributing to our nation’s defense and protecting the freedoms we enjoy? And how are we helping our engineers to be better and how are we advancing their careers? I want to expand to serve different regions and give back to the Huntsville community and the Native American community, but at the end of the day, I don’t have a specific number in mind. Owning a small business is the best engineering project someone can give you. There are too many variables and a constant pursuit of solutions.

Any advice for future entrepreneurs?

If you are a minority, don’t look at yourself as a minority. Focus on who you are and what you want to achieve and don’t be distracted by the labels that society puts on you.

I think in today’s society people are becoming very accepting of women as engineers. We are still a minority, but we’ve come a long way. The playing field is leveling and I finally feel like I have a seat at the table, but that didn’t come without blood, sweat, and tears.

Being a single mother, I’m not sure I knew what I was getting into initially, but my 3 kids have been my greatest champions. I probably missed one too many family dinners and took them to McDonald’s one too many times, but at the end of the day you just have to ask yourself, am I doing the best I can do?

I’ve definitely have had my share of successes and failures but I wear my scars proudly on my back.