MADISON — On a sunny, let’s-play-three day that begged for baseball, even though the calendar had turned mostly toward football and beyond, the Rocket City Trash Pandas got a name for their new home yard hard on the Huntsville-Madison city limit lines.

Toyota Field will usher in the inaugural season of the Double-A Southern League team in April 2020.

Toyota Field is a name for that’s been in the works basically as long as the team, and stadium, have been an idea.

Team President and CEO Ralph Nelson, along with local dignitaries, announced the name on Columbus Day at the stadium that is still under construction.

But the ship of what the stadium would be named, however, set sail about two years ago.

“The day after Thanksgiving in 2017 my wife, Lisa, and I were driving in the hills of Vermont to cut down a Christmas tree,” Nelson said.

The phone rang and it was David Fernandez, then the president of Toyota Motor Manufacturing Alabama.

“In the first minute, he said, ‘Let ‘s figure out a way to put Toyota’s name on your ballpark.’”

They did, and, after two years of crossing t’s and dotting i’s and other legal discussions, Toyota Field was born and became official with the announcement. 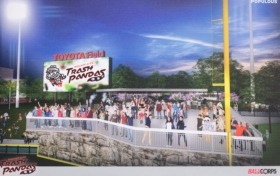 Rendering shows the Toyota Field name on the video board neat the Rock Porch in right field. (Photo/Steve Babin)

“It’s incredibly rare for a global corporation to acquire the rights to a minor league stadium,” Nelson said. “But as I’ve said so many times, this is not the minors. This community expects and deserves a major league operation. Toyota Field is very major league.

“In that first call, David told me he wanted Toyota team members to look with pride at their company name on a prominent community landmark. I told him unless he can buy the rights to that rocket ship (at the Space and Rocket Center), he’s come to the right place.’’

Toyota Motor Manufacturing Alabama employs 1,400 workers in Huntsville and is expected to add 400 more in the near future.

“Toyota Field is the new centerpiece of the region that showcases economic development, job growth and quality of life,’’ Finch said. 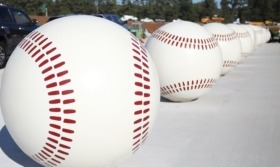 The field’s entrance on the first base side will feature an area overlooking the park and will be called Bill Penney Toyota Plaza. Below is a grassy berm where fans can sit and watch the game. The stadium is ringed with roughly 5,000 seats with a capacity of 7,500. There’s a picnic area down the left-field line and VIP suites above the general seating.

Toyota is planning a showcase of its local products in center field.

“To see the project come to life has been amazing and the energy from the community is contagious,” Finch said.

‘Corner Office’ Coming to 125 North Side Square
Scroll to top