It was a picture-perfect launch and landing Thursday for Blue Origin’s New Shepard program.

The NS-14 booster touches down at the landing pad about two miles from where it lifted off at Blue Origin’s Launch Site One in Van Horn, Texas. (Blue Origin Photo)

New Shepard is designed to take astronauts and research payloads past the Kármán line (100 km), the internationally recognized boundary of space, returning them to Earth with minimal refurbishment required between flights. Thursday’s flight was the 14th mission to space and back for the New Shepard program.

The rocket engine company founded by Amazon’s Jeff Bezos has a $200 million, 350,000 square-foot plant in Cummings Research Park. The plant will make the company’s reusable BE-4 and BE-3U engines for the New Glenn program.

The engines will be tested at Test Stand 4670, the historic site at Marshall Space Flight for testing the Saturn V first stage and the space shuttle main engine. Blue Origin has begun refurbishment, restoration and modernization of this piece of American history, bringing the sound of rocket engines firing back to Huntsville.

Mission NS-14 featured a crew capsule outfitted with astronaut experience upgrades for upcoming flights with passengers onboard. There were no passengers on Thursday’s flight.

Among the upgrades in the six-passenger capsule are speakers in the cabin with a microphone and a push-to-talk button at each seat so astronauts can continuously talk to Mission Control; an alert system with a panel at each seat relaying safety messages to passengers; and cushioned wall linings and sound suppression devices to reduce ambient noise inside the capsule. 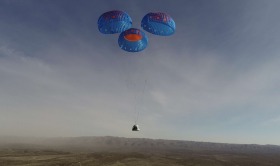 Blue Origin said the flight continued to prove the robustness and stability of the New Shepard system and the BE-3PM liquid hydrogen/liquid oxygen engine.

Boeing Awarded Nearly $1B for Air and Missile Defense