Redline Steel has produced some 5 million products from its 110,000 square-foot facility in SouthPoint Business Park.

Traveling the world as a fitness model.

Humanitarian and philanthropist in line to receive Huntsville’s “Key to the City”.

His company, Redline Steel, is ranked 110th among the Inc. 5000 Fastest Growing Private Companies in America – and is the fastest-growing company in the state

. In addition, Inc. 5000 recognized Redline Steel as the No. 4 Fastest Growing Manufacturing Company nationally with a recorded growth increase of 3,215 percent from 2019 to 2020.

Quickly becoming one of the largest steel monogram companies in the U.S., Redline Steel is expecting to surpass $100 million in sales by the end of the year.

But, to Wayne, giving to the community is what moves him.

“I am an entrepreneur, but I have always been a humanitarian and philanthropist at heart,” he said.

Wayne’s journey to becoming a steel manufacturing expert has been nothing short of extraordinary.

He was seriously injured in a rocket attack eight years ago in Afghanistan and spent six months in physical therapy and recovery from lumbar fusion surgery on his back.

Transitioning out of the Army in 2013, he traveled the world as a fitness model gracing the cover of more than 50 men’s health magazines and promoting products for Under Armour and Nike.

Moving back to Huntsville in 2015, it was a fortuitous business transaction that led Wayne to steel manufacturing and eventually build Redline Steel into his own company in January 2016. 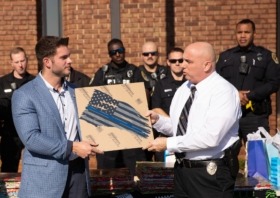 Since then, Wayne has paid his good fortune back to the local, regional, and national communities that have resulted in his success many times over.

His company donated $50,000 to the Huntsville Police Department and, in 2017, donated $25,000 to the American Red Cross. Redline Steel has also given back to Alabama farmers, veterans groups, schoolteachers, and truckers.

In the meantime, like hundreds of other businesses, Redline Steel has been adversely affected by the pandemic.

But, unlike hundreds of other businesses, he didn’t let it adversely affect his employees. Redline Steel employs more than 85 employees and based on current projections, Wayne expects that to reach over 100 by end of the year.

“When the coronavirus hit this spring, I doubled our workforce, and we did not lay anyone off, even during the worst of it,” Wayne said. “Then, to lessen the negative impact, I paid all our employees’ house payments in April.

“The coronavirus has been challenging because we have struggled like everyone else to find ways to combat it and keep going. It caused a lot of stress on the company’s growth because of the unknowns and we have had more unemployment the past couple months than we have had in over 50 years.

“People aren’t spending like they were before the pandemic, so we had to get creative to find different ways to monetize.”

He said now that almost every state including Alabama has mandatory mask requirements, they began getting a lot of requests for them through their website. They set up a partnership to make and sell face masks but – to him – that wasn’t enough.

“We donated over $4 million in products to provide support for essential healthcare workers and partnered with my friend, actress Megan Fox, to donate $3.2 million to medical support personnel and first responders,” he said.

From its 110,000 square-foot facility in SouthPoint Business Park just off Interstates 65 and 565 in Tanner, Redline Steel manages all manufacturing and fulfillment coming from their online retail store. In its first four years in business, they have moved some 5 million products. Their mostly steel-based products include personalized and monogrammed gifts, home décor, jewelry, children’s items, and accessories.

Colin Wayne takes a selfie with President Trump after a ceremony in Washington.

This year, President Trump invited him to the White House where he awarded Wayne with a signed commendation plaque. They also took a selfie together and Trump bought an American flag from his company’s Patriotic Flag Collection.

More recently, he was nominated for the 2020 Russell G. Brown Executive Leadership Award in Alabama for Small Businesses and will be receiving Huntsville’s Key to the City recognition for his charitable community involvement.

“I look for causes whose missions align with my values and beliefs,” Wayne said. “My five-year-old niece was recently diagnosed with cancer and the Olivia Hope Foundation specializes in pediatric cancer.

“She is currently in remission, but she is still on oral chemotherapy and it is very difficult.”

“We are also launching a campaign with Midnight Mission,” he said. “They feed the homeless and, of course, that is important to me because 70 percent of homeless people are war veterans.”

In August, a long list of Hollywood celebrities teamed up with Habitat for Humanity to promote a social media campaign called #Hammertime. Redline Steel became involved by making a special steel hammer to send to every person who donated $25 or more.

“And Habitat for Humanity,” he said. “They are a much larger organization obviously, but they are also a Christian organization that helps people in need to build homes.”