MADISON — It wasn’t a stretch for Madison Mayor Paul Finley to make a Super Bowl reference Friday night in his annual State of the City Address.

“This is the second opportunity I have had to give the State of the City Address and on behalf of the City of Madison and the Madison City Council, I am able to say again that the state of the city is strong and continuing to get stronger,” said Madison Mayor Paul Finley from beneath the Saturn V rocket at the Davidson Center. “I am so proud to be the mayor of Madison … and if you want some examples, let me give you a couple…,” upon which images of former Bob Jones High School star Reggie Ragland, and Madison Academy’s Jordan Matthews popped up on the big screen to thunderous cheers from the audience. 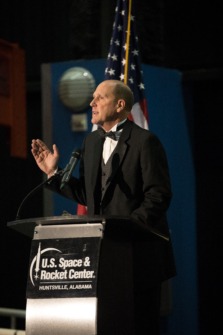 Finley also made two “super” announcements at the address that had not yet been revealed.

The first is the city’s upcoming acquisition of the 28,000 square-foot Three Springs juvenile facility on Browns Ferry Road.

In addition to the recent announcement about J. Alexander’s restaurant coming to Town Madison, Finley said they are also expecting a 200-room Marriott near Toyota Field; Outback Steakhouse and Panera Bread Company will open on the Zierdt Road side of the development and The Hub, a newcomer to the state.

Residents who spend vacation time on the Florida Panhandle will be familiar with The Hub, a relaxing outdoor venue surrounded by live music, ice cream, burgers, and family-friendly movies shown under the stars.

“Town Madison is going to continue to build out,” Finley said. “Outback, Marriott and Panera Bread already have a footprint in the Tennessee Valley, but Town Madison will welcome the first Hub in Alabama.

“The Marriott is the fifth hotel announced – and just so you guys know, the matrix we put in place to fund the stadium had three hotels in that matrix. We are now at five.”

Concerning Three Springs, Finley said the city will be purchasing the empty 33-acre facility, using funds from the sale of the Madison Library. Over the next four to five years, it will be converted it into a community center.

Finley said there are several local entities such as the Madison City Senior Center; the Enrichment Center, which helps schools with counseling; and American Legion Post 229, which is involved in Memorial Day and Veterans Day events around the city that are all bursting at the seams when it comes to parking and office space.

“This purchase will take our city to the next level,” Finley said. “The library is not the right fit for our city right now, so it is up for sale. Over the next five years, you will see other organizations who also need more space, move into the old Three Springs facility.”

Other significant highlights from the speech were updates on sidewalk improvements at Dublin Park to make it safer; the revitalization of an aging Hughes Plaza, a retail center on Hughes Road across from City Hall; and numerous improvements to older office complexes and buildings.

Furthermore, the City Council invested more than $4 million in a new public works facility. They had outgrown the aging building and there wasn’t enough parking for the employees or for the service trucks. The new facility is on 16 acres and they will move into it in a couple of weeks.

“That is astronomic growth,” Finley said. “In fact, we are in such good shape in our city that our Rocket City Trash Panda mascot, Sprocket, was just named one of the top 20 people locally of 2020.

“Because of what we are doing, we are collectively blowing this growth thing out of the water and the state of Alabama is stronger because this community is stronger.”

There was also a special recognition for Madison City School Superintendent, Robby Parker who is retiring this year; and the mayor announced that the Trash Pandas have broken records, selling over $2 million, in Trash Panda merchandise.

There will be no traffic relief for residents and businesses traveling Madison Boulevard from Zierdt Road to Wall Triana while construction continues on the I-565 interchange at Town Madison; but a greenway extension will run under the railway tracks just south of Palmer Road, into historic downtown Madison where Sealy Realty is building the Avenue Madison, a multi-use residential, retail and commercial development right in the heart of downtown.

“It’s an exciting time right now to be in our city,” said Finley upon conclusion. “We are managing growth, we are open for business, but we are being really smart about it.”