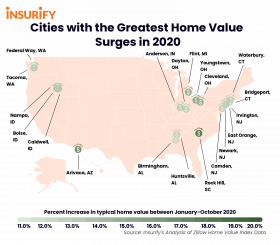 A recent study has found that in 2020, the typical home value in Huntsville experienced one of the highest surges among real estate markets across the country.

Between January and October 2020, home values in Huntsville increased by 12.57 percent, which is 1.95 times greater than the national average.

Huntsville was ranked 15th in the country among the top 150 metropolitan areas. The Zillow Home Value Index (as of last October) was $200,455 and Huntsville’s statewide relative home value increase was 4.32 percent (17th in the nation), according to the study.

The housing market in 2020 has shown that despite dire economic circumstances, people have demonstrated a piqued interest in investing in a home, particularly in more affordable areas. In order to understand how the shifting priorities of home buyers have shaped the real estate market this year, the research team at Insurify examined data from Zillow to identify the cities with the most significant surges in home values in 2020.

Analysts at Insurify referred to Zillow’s Home Value Index database to identify the cities with the highest increase in home values over the year.

The research team at Insurify, a home insurance quotes comparison site, examined public data from Zillow to identify the cities with the greatest increases in home values in 2020.

Using city-level population estimates from City-Data.com, Insurify’s analysts selected all regions in the Zillow database that have a population of at least 50,000, per the U.S. Census Bureau’s definition of an urban area. Within this subset, the regions with the greatest relative increase in home value between January and October 2020 were identified as the cities with the greatest home value surges this year.