Symbolic of the growth in Huntsville and its anticipated growth, a nearly 35-year-old apartment community was recently purchased for a reported $81 million.

According to a news release from The Kirkland Company, a Nashville-based brokerage firm, the Reserve at Research Park was purchased by Covenant Capital Group from B&M Management. The acquisition is the largest transaction in the area’s history, according to the brokerage firm.

Eric Hardesty and Wade Lowry brokered the sale of the 736-unit multifamily community for Kirkland. The property, formerly known as Rime Village, was built in several phases from 1987-94.

“Huntsville is receiving national attention for its rapid growth, strong economy, and recent development,” said Hardesty. “It has been Alabama’s fastest-growing city over the last 15 years and will soon be the largest city in the state.”

B&M Management of Montgomery sold the property on Explorer Boulevard off University Drive to Covenant Capital Group, a Nashville-based value-add investment manager. Its focus is on the acquisition and renovation of apartment communities in major Southeastern and mid-Atlantic markets.

B&M Management has been in Alabama for more than 25 years with a portfolio of some 8,500 units and $1 billion in market value.

This is the sixth transaction brokered by Kirkland in the Huntsville area within the last nine months, representing 1,842 units and more than $103 million.

“Employers are investing big in Huntsville,” said Lowry. “Companies like Toyota, Boeing, GE … are infusing capital into the engineering and manufacturing industries.

“The FBI is investing $1 billion at Redstone Arsenal with plans to add 4,000 jobs, and tech companies like Facebook and Google are also developing a presence there.”

Nashville-based Kirkland specializes in selling apartment communities in nine states across the Southeast.

A welcomed and long-awaited facelift is coming to a stretch of one of Huntsville’s primary thoroughfares.

A 45-acre block off University Drive at Independence Drive and Lancewood Drive will be revitalized in a $27 million acquisition by  Philadelphia-based Penn Capital, an integrated private investment company. 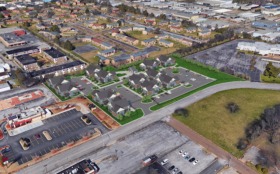 The former GuestHouse Suites are part of the $27 million redevelopment project. (Image provided by Penn Capital)

The company has purchased the former GuestHouse Suites from the Huntsville Hospital Foundation as part of the acquisition. The project includes renovating and redeveloping three properties along University Drive across from the University of Alabama in Huntsville.

In addition to the former GuestHouse Suites at 4020 Independence Drive, Penn Capital is revitalizing the former North Ridge Apartments and the Continental Apartments adjacent to it. The project totals 458 apartments along University Drive and creates a 45-acre “super block” of 546 apartments. It is strategically aimed at revitalizing the surrounding community, which has suffered from blighted conditions over the past 10 years.

According to Penn Capital founder Ed Rogan, the properties fit the company’s investment strategy to invest in Sun Belt markets from Texas to Florida where there is tremendous economic growth. 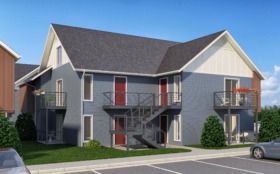 Penn Capital wanted to come into Huntsville, he said, because of the job growth around the new Toyota production plant, and the aerospace and military presence.

“We look for projects in good areas or even areas that have had some distress issues like these three properties,” Rogan said. “A lot of people would have passed on this project because it isn’t visually appealing, but we have a vision where our work revitalizes the community and surrounding neighborhood and improves the standard or living and quality of life for people.”

Just two miles east of the MidCity Huntsville project, the former North Ridge Apartments complex has been renamed Madison Grove. It consists of 105 buildings and 390 apartments, all two-story townhouses.

“The buildings are in good condition, well built in the mid-1960s,” Rogan said. “They have solid foundations and great structures, but it had become known for a lot of crime.

“We came in and secured the premises by putting up a fence and security cameras to keep out trespassers, put in new lighting to light up the grounds, and the police department hired off-duty police officers to patrol the property. Then we began work improving and upgrading the exterior façade and doing some landscaping to give it curb appeal.” 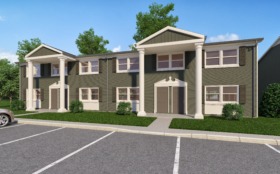 Rogan said they are working with Huntsville’s Blue Star Crime Free Multi-Housing Program to help residents, owners and the managers of rental properties to keep drugs and other illegal activity off their property.

“We are also renovating the interiors with all new appliances and the amenities required to take it from what was a D-class property with a lot of crime, deferred maintenance, and poor living conditions, to a safe and attractive Class-A property for middle class families,” he said.

Rogan said the property did not come without some challenges, however.

“Because of the age of the property, the structures are not up to today’s building codes and even the electrical infrastructure needs to be rewired,” he said.

But, they are working with the city to upgrade it.

“We have the same interests in that revitalization will increase the tax base tenfold, increase the quality of people living there, and create a safer living space,” Rogan said.

The former Continental Apartments will be renovated into The Ave. (Image provided by Penn Capital)

Penn Capital is doing the same with the Continental Apartments, which they have renamed The Ave. It is a two-story, 88-unit apartment community consisting of 66 studios and 22 two-bedroom/two-bath apartments.

“The Continental and hotel are vacant, so we have been able to move quickly to replace all the roofs and windows,” Rogan said. “We are doing a complete redevelopment with new exterior facades and landscaped grounds. It will have high quality, Class-A finishes that will attract higher-end tenants.”

He said the Continental is a unique building from the mid-1960s which was built to house visiting generals and high-ranking military officers who were visiting Redstone Arsenal.

He said they are well built with a good strong infrastructure, structural concrete and steel girders in the ceilings that can be used to increase ceiling height and create trendy styles like exposed-beam ceilings. It will become a smart property, fully outfitted with WiFi and a great opportunity for housing students and families.

Penn Capital plans to invest $5 million to redevelop the aging hotel at 4020 Independence Drive. The original extended-stay already has kitchens that will lend themselves well to studio apartments – a good fit for college students.

“The hotel has a 5,000 square-foot lobby on the first floor that we are renovating and putting in an exercise center, leasing office and clubhouse with a new swimming pool, outdoor kitchen and dog park,” Rogan said. “On the second floor, they are putting in a new shared workspace so people living in the surrounding complexes can come there and use the business center.”

Rogan said the work is expected to be completed on all three properties in about 10 to 12 months and a ribbon-cutting for all three is planned in about 18 months.

The Huntsville Real Estate Market set a record pace throughout 2019, ending the year on a high note, according to a report released today.

The Huntsville Area Association of Realtors’ Fourth Quarter Real Estate Economic Report, conducted by the University of Alabama in Huntsville, found sales grew by more than 15 percent compared to the same quarter in 2018, with 1,995 homes sold in the quarter.

“We witnessed major growth in our industry last year, as more choose to make Madison County their home,” said HAAR President Sha Jarboe. “While this is great news for our city and industry, it also presents challenges as inventory reached historic lows in December with less than 1,000 available homes for sale.

“This report reinforces the need for attainable housing in our area and, as community advocates, Realtors stand ready to work with our local builders to make sure they have the skilled labor they need to meet our area’s construction needs. We also look forward to our continued collaboration with local leaders to support sensible laws that support the American dream of homeownership.”

Here are some key takeaways from the report:

For information and to see the full report and other reports, visit haar.realtor.

MADISON — As Bobo Development Group announces the closure of the funding phase of its multifamily luxury apartment development, residents are one step closer to having a new, “future-ready” place to call home. 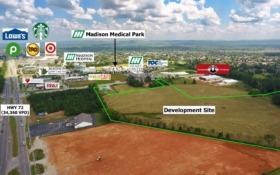 The group plans to begin construction of Alexandria Apartments on a 16.54-acre site just west of Madison Medical Park on Balch Road no later than Jan. 31.

“The Huntsville Metro area is home to a multi-faceted population of professionals, a large percentage of them transplants. These people are looking for a living space that makes daily life a little easier while nurturing a community” said James Bobo, II, CEO of Bobo Development Group and the project’s developer.

“By creating a future-proofed space, the community our residents create can stand the test of time.”

Alexandria Apartments will include 258 units consisting of one-, two-, and three-bedroom apartments along with 29 garage units equipped with electric vehicle charging stations. It will also feature a dog park and clubhouse with a co-working space.

The total capitalization of the development will be $40.1 million, according to Bobo Development Group.