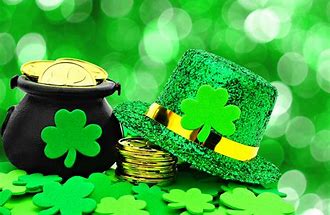 If all you know about St. Patrick’s Day is shamrocks, leprechauns, and Lucky Charms breakfast cereal, you might be surprised to learn there is an economic message wrapped up in all that ádh mór coming your way March 17.

This year, the 42nd annual Ellen McAnelly Memorial St. Patrick’s Day Parade will draw 1,500 participants and more than 40,000 onlookers along the downtown Huntsville route, bringing a lot of “green” to merchants in its path!

May your pockets be heavy, and your heart be light, may good luck pursue you each morning and night – Irish Proverb

Luck is an integral part of life and prosperity in the Irish tradition but the phrase “Luck of the Irish” is an American expression and not an Irish one.

According to Edward T. O’Donnell, an author and professor of history at Holy Cross College, the phrase took hold during the California Gold Rush in the second half of the 19th century when many of the most successful and famous gold and silver miners were of Irish and American Irish descent.

Ellen McAnelly moved to Huntsville in 1977 from Galway, Ireland. Wanting to introduce authentic Irish tradition, culture, food, and hospitality to North Alabama, she opened Huntsville’s first Irish restaurant – Finnegan’s Pub – at 3310 South Memorial Parkway and the following year, she started what was known for many years as the Huntsville St. Patrick’s Day Parade. The short route followed a southerly path along the west side frontage road of Memorial Parkway, ending at Finnegan’s.

McAnelly died in 2009 and, shortly thereafter, the parade moved to downtown where it was renamed in her honor.

“The Huntsville community really lost a landmark when Finnegan’s closed in 2013,” said Anya Douglas, president of the Irish Society of North Alabama and the parade director. “A lot of people met their spouses there, accepted marriage proposals, and conceived children after a night of fun at Finnegan’s.

“The original patrons recall many special occasions and events occurring at the original Finnegan’s Pub.”

May the road rise up to meet you; may the wind be always at your back – Irish Blessing

“That first year, there were 18 people in the parade and almost no audience,” said Sonnie Hereford, one of the first and only remaining parade coordinators from 1978. “There are only 17 people in the picture taken for the newspaper that day because one of the participants had skipped work and he was afraid if he showed up in a picture in the paper, he would get fired!

“The funny thing about the history of the parade is that it grew in popularity and size almost exclusively because it had been mocked as the smallest St. Patrick’s Day Parade ever.”

The parade took another big hit just days before the 1997 event when then-Huntsville Mayor Loretta Spencer denied the group a permit because of a series of fender benders in 1996 allegedly caused by drivers on the Parkway gazing down on the parade marching along the frontage road.

At the last minute, they received an invitation to move the parade to downtown Madison where it had its largest participation and audience yet. For that one year, it was called the Madison County St. Patrick’s Day Parade.

“The parade is community inclusive even if you are not Irish,” said Douglas. “It is free to participate and free to attend but it brings a tremendous amount of business to the downtown area including shopping, dining, and entertainment.”

The most anticipated parade event is the Blessing of the Flags at St. Mary of the Visitation Catholic Church on Jefferson Street.

“When Father Bill (William M. Kelly, S.D.S.) performs the blessing ceremony over the Irish and American flags, it really has special meaning for the American Irish community and leaves everyone, Irish or not, with a ‘Wow’ feeling,” said Douglas.

Another popular attraction at the parade is the Father Trecy Division of the Ancient Order of Hibernians’ float.

Father Jeremiah F. Trecy moved to Huntsville in 1860 because of health problems and established a parish here. The church was built of native stone from Monte Sano Mountain, but construction was halted during the Civil War while the Hibernians prepared hospital facilities and tended to the wounded on both sides of the conflict.

The parade’s main sponsor Straight to Ale, Keegan’s Public House (who bought Finnegan’s and moved it downtown), and the Jefferson Street Pub are all opening at 6 a.m. serving an authentic Kegs & Eggs Irish Breakfast prior to the parade, which starts at 11:30. Green Bluff’s Brewery, Pints & Pixels, and The Marini Bar & Bistro will offer all-day live Irish music and $1 green beer along the parade route.

While you’re there, be sure and lift a glass in a famous Irish toast: Here’s to a long life and a merry one. A quick death and an easy one. A pretty girl and an honest one. A cold pint and another one!