MADISON — It was the first grand opening and ribbon-cutting event in Madison since before the COVID-19 related shutdowns in March. 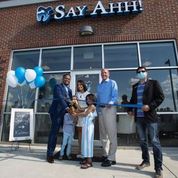 Madison Mayor Paul Finley and the Madison Chamber of Commerce were on hand for the opening of Say Ahh! Family and Cosmetic Dentistry on U.S. 72 at Nance Road.

Dr. Joyce Bellamy and her husband, Michael, had business ventures in the works when the shutdowns began.

They had procured the location for her dental practice last summer and began hard-core renovations of the storefront in December that transformed the space into a luxurious, high-tech dental facility with an inhouse lab for making their own crowns.

They were right on schedule for a March grand opening when just days before their scheduled ribbon-cutting, Gov. Kay Ivey announced the first stay at home order due to the COVID-19 pandemic.

Michael was slated to become a professor at the Decatur campus of Calhoun Community College but that is on hold while Calhoun works through its plans for holding classes this fall.

He was also launching his Bags to Briefcase Business Consulting Group when the pandemic struck. He had to put some of his motivational speaking engagements on hold as all large gatherings have been cancelled.

“It was a full year of work and we were devastated, but God has His reasons,” said Dr. Bellamy during the delayed ribbon-cutting and open house earlier this week. “Michael has been working on his doctorate and was about to launch his Bags to Briefcases consulting business in unison with our opening Say Ahh!, but God had a different plan for us.”

The couple held an opening prayer and official dedication ceremony for the open house.

“Any event that starts with prayer, especially with everything that is going on today is so welcomed,” said Finley. “To have a new family business opening up and investing in our city is exciting and on behalf of our city council and the Chamber of Commerce, we wish you success, we are glad you are here, and we are appreciative of your investment.” 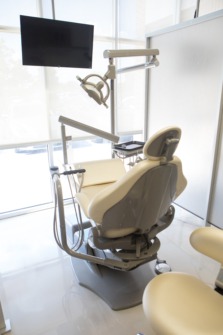 Dr. Bellamy is a Huntsville native and honors graduate from Oakwood University. She received a Doctor of Dental Surgery from the University of Michigan School of Dentistry where she was appointed clinical adjunct professor in the Department of Caries, Restorative Sciences, and Endodontics. She returned to Huntsville where she has practiced dentistry for the past eight years.

The newly renovated facility with its exposed ceilings and bright open-air feel was designed by Huntsville designer Marc Nixon of Marc Nixon Couture, whom Dr. Bellamy describes as her best friend since age seven.

“I wanted it to be nice and comfortable for our patients with a modern design,” Said Dr. Bellamy. “I gave Marc a basic idea of what I was looking for, which is clean, classy, and elegant, but it came out beyond my wildest dreams.”

One guest at the grand opening commented, “This doesn’t look like any dentist’s office I have ever been to!”

The practice will have two to three dentists in addition to Dr. Bellamy. It has an operatory office and unexpanded function rooms with an in-house lab where Say Ahh! can fabricate ceramic restorations such as inlays, crowns, and veneers chairside.

Say Ahh! will welcome its irst patients June 8 and Dr. Bellamy said they will adhere to all OSHA and CDC specifications. Personal protective equipment is worn at all times in treating patients and they have a safe practice system in place as they focus on the cutting edge of the dentistry industry.

“We have some very exciting services on the horizon, and I hope within the next three to six months, we will be doing some major expansions and bringing some really cool things into the practice,” said Dr. Bellamy. “We offer relaxation sedation and accept all types of insurance with specials for people without dental insurance like free examinations.”

Michael Bellamy will be managing all aspects of the practice including marketing and communications for the near future. The shutdown affected his immediate plans as well.

Michael discussed his motivation behind Bags to Briefcases.

“My mother was a teacher and my father military, but they wanted me to have a Christian education,” he said. “There was a lot of sacrifice involved in keeping me in private Christian school, so when I was young, every year I got two trash bags full of neatly pressed hand-me-down clothes from my church.

“As I grew up, I became a counselor and was involved in the Boys Clubs and pastored in Michigan for many years. Everybody starts somewhere and with every experience, there is an elevation, a transition from where you started. Along the way, people put things in that bag to help you move forward – anything from a nice suit of clothes for an interview to helpful nuggets like maintaining good grades and treating people how you want to be treated. It becomes your portfolio in life and your keys to success.”

Auto Dealerships Driven to Survive During an Economic Storm

Rime of COVID-19: Virus Hanging Like an Albatross Around Our Necks
Scroll to top