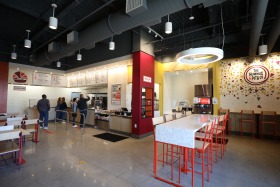 Hold on tight and brace your tastebuds, The Hummus & Pita Company is delivering a fresh take on Mediterranean fare, here in the Rocket City. It’s great tasting food that’s also good for you.

Since 2011, Hummus & Pita Co. has been delivering guilt-free, homemade cuisine. The restaurant features a fast-casual Mediterranean-inspired concept, with nods to Greece, Israel, Morocco, and Middle East fare. All menu items are made from scratch onsite, using only the freshest ingredients.

“It’s a company based out of New York,” said General Manager Tiffany Jenkins. “They wanted to start franchising in the South, our first store is in Atlanta, in the Dunwoody area, where we trained. The next store is Huntsville, and we’re opening a store in Montgomery.”

There are eight locations, three in the Big Apple: Chelsea, Tribeca, and the Upper East Side. There are also Hummus & Pita Company franchises in New Jersey, Connecticut, Michigan, Georgia, and now, Huntsville.

Jenkins, a veteran of the Earth Fare stores, knows quality when she sees it. When Earth Fare shuttered its doors, she sought work in the food-service industry, in a place that offered healthy food choices and high quality eats.

Hummus & Pita was the perfect fit.

“We’re excited to be expanding The Hummus & Pita Co. further into the Southeast with the Huntsville opening,” said co-founder Dave Pesso. “The popularity of Mediterranean cuisine is rapidly growing in the Southeast and we look forward to introducing our fresh, innovative, and flavorful meals to this region.”

There’s a wide selection on the menu, including six varieties of hummus, eight sauces, and an assortment of vegetables. Menu items include gluten-free, dairy-free, and vegan options.

As one of the “Quick it” entrees, the Roy is a study in color. It consists of rice, hummus, eggplant, corn salad, red cabbage, tomatoes, cucumbers, and a choice of sauce to top it off. 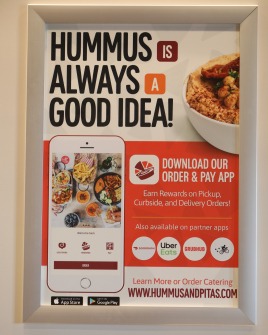 The Chickpea Chiller is Hummus & Pita’s signature shake. To most people, this might not sound very appetizing right off the bat. The Chiller is all-natural vegan, dairy-free, and gluten-free and comes in five flavors: butter pecan, pistachio, chocolate, strawberry and vanilla. In addition to chickpeas, the frozen concoction includes tahini, frozen bananas, dates, almond milk, and a pinch of pure vanilla and cinnamon.

Business has been doing well, according to Jenkins. For those dining inside, there’s staggered seating and frequent sanitization. Although the dining area seems empty, the pickup, takeout, and delivery orders balance out the equation.

Hummus & Pita is open daily from 11 a.m. – 8 p.m. and offers dine-in, curbside, takeout, and delivery via third-party partners.  Customers also can download the app through the Apple Store and Google Play to order in advance and take advantage of loyalty features.