Huntsville will receive a $50,000 donation to the Food Bank of North Alabama, and numerous other donations from Booz Allen Hamilton, as part of the company’s national $100 million pandemic resilience program in support of its employees and the communities where those employees live and work.

Huntsville is one of 10 cities to receive these funds out of the $1 million national donation to Feeding America’s COVID-19 relief efforts.

Shirley Schofield, executive director of the Food Bank of North Alabama, said she is grateful for the donation on behalf of the 11 counties and network of 250 food pantries, homeless shelters, soup kitchens and rehabilitation centers who partner to provide food to those in need.

“This is a tremendous gift for our community,” Schofield said. “This is funding that will go straight into the community and help feed many people and families affected by the current crisis.

“Generally, we are able to convert every $1 into seven meals, so if you do the math on that, it is a lot of food coming into this community thanks to Booz Allen Hamilton, and we are very appreciative of that.”

Her organization has seen a tremendous increase in the need for food since the shutdown ensued.

“Since March 15, we have provided almost a million meals to people in need, and every day, we hear from someone who has never had to seek assistance before,” she said. “They have worked full time but got laid off and they have not yet received their unemployment benefits.”

Another of those programs help families who count on the free lunch and breakfast programs at schools, who are feeling the pressure to accommodate two more meals a day for their children since the school system has moved to online classes from home.

“We have a lot of partnerships that work together to provide meals to all those kids, and we are one of the main suppliers of food for that,” said Schofield.

Booz Allen Hamilton also made a $15,000 donation to the Huntsville Madison County Chamber of Commerce Foundation’s digital STEM learning hub A Smart Place, which is being used by students and teachers as part of the remote-learning system. With city and county schools having moved to daily online learning during the COVID-19 pandemic, the donation is timely to say the least.

Lincoln Hudson, senior vice president of company’s Army business in Huntsville, is on the board of directors for the  Chamber of Commerce. He said the $15,000 donation to the Chamber’s Smart Place will significantly boost local schools’ laptop loaner program and access to Wi-Fi.

“This goes directly to one of the problems we see due to the unexpected shutdown of the schools,” he said. “I think it was pretty timely and right in line with what is expected of technology companies, and it has helped too with planning for the future to keep education moving forward.”

Booz Allen made a $1 million donation to the national CDC Foundation and Huntsville’s portion of that money will go directly to support local emergency response priorities such as staffing and helping front line health care workers during this critical time.

Furthermore, in partnership with the independent Booz Allen Foundation, the company has committed at least $10 million in assistance to local communities across the U.S. in the form of cash donations, grants, volunteer hours, pro-bono work, and technology to help military families, veterans, front line healthcare workers and those who are most vulnerable to the virus, including the elderly and homeless.

In addition to the initial funding, Booz Allen Hamilton is also exploring pro-bono, skills-based, and general volunteerism efforts in Huntsville.

With the Army being the preponderance of the 225 people Booz Allen Hamilton employs on Redstone Arsenal, followed by the FBI and to a lesser extent, NASA, Huntsville will also see the impact of more than $1 million in donations to the COVID-19 Military Support Initiative, which supports veterans and military families during this unprecedented time.

The initiative is another slice of the $100 million pie, some of which will be routed to Huntsville to tackle employee health issues, provides an increase in the general benefit for employees, and offers flexibility for support services distributed through charitable donations.

“On top of all of this, the big takeaway is that Booz Allen made the commitment across the whole firm to say, ‘If you’re a Booz Allen employee, you have a guaranteed job all the way until July 1’,” said Hudson. “Over 90 percent of our employees are teleworking so that is a great position to be in because that is not the case everywhere.”

He said it has been great working with Redstone Arsenal because they were so quick to adapt to a teleworking mentality.

“That has been a huge stress relief for employees and their families,” Hudson said. “Not only does it give them the security to pay their bills, but it also helps us to be able to support our customers so business can go forward.”

Huntsville gets a chance to do what she does best: combine her creative thinking skills, her complex problem-solving expertise, and advanced technology capabilities to find ways to combat the wide-ranging negative impacts of the COVID-19 pandemic.

These opportunities arise from an Innovation Fund created by the Booz Allen Foundation. The fund will award up to $1 million in grants to help nonprofits, entrepreneurs, thought leaders, innovators at colleges and universities, startup companies, and small businesses, harness the power of data, technology, and diverse intellectual capital, to improve COVID-19 relief efforts. The foundation wants to bring to the surface the most innovative solutions, while empowering individuals and small businesses behind those solutions towards development and implementation.

The two main areas of focus for the funding are finding solutions that build community resilience, while protecting vulnerable populations and frontline workers; and ways in which workers can return to work safely.

Booz Allen is looking for new technologies, new ways to collect data, a new way to develop personal protective equipment, and new social connection methods – all with the goal of eliminating the negative impact of the pandemic.

The grants will be awarded to the best ideas for creating systems, products and technologies; and finding new approaches, delivery systems, or processes.

“We are seeking the most innovative solutions to the unimaginable challenges that our world faces today as a result of the COVID-19 pandemic,” said Nancy Laben, co-founding board member of the Booz Allen Foundation. “Through the Innovation Fund, the Booz Allen Foundation seeks to empower individuals and organizations with resources to truly change the world and bring to life their brightest solutions in support of the most vulnerable among us as we navigate this unprecedented time together.”

Applications must be submitted by June 5 to be eligible and will include answers to a brief set of questions about how your solution or project will solve an urgent social problem or build community resilience in the wake of COVID-19.

Awards will be announced in July.

The Booz Allen Foundation was created in 2017 as an independent 501(c)(3) organization dedicated to convening diverse stakeholders to solve challenging social issues.

On April 1, the Booz Allen Foundation and Booz Allen Hamilton launched a coordinated philanthropic initiative to address pandemic-related issues, including initial giving to address the immediate needs of vulnerable local populations through the Feeding America network of food banks and community-based agencies. The launch of the Innovation Fund continues the foundation’s ongoing support for communities impacted by COVID-19.

In a conference room at Booz Allen’s fifth-floor Bridge Street office, anyone wearing virtual reality headgear can instantly be standing in the open door of a military plane flying above a training facility on the United States base of the instructor’s choosing. 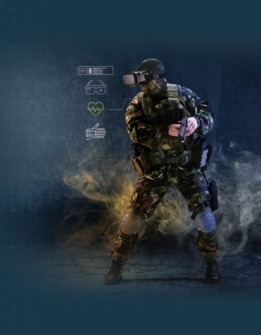 Open architecture is aimed at reducing weight and providing faster upgrades to equipment on the battlefield. (Photo/Booz Allen)

A first-timer wearing the contraption looks around the inside of the plane, steps to the edge of the door and is gripped by an uneasy sensation after looking down. Minutes later, the same first-timer shoots “bad guys’’ in an urban environment resembling those seen on battle footage from the Middle East, a realistic M4 that is surprisingly light providing the firepower.

Simulation — which Dillon said could be a big money saver for defense — is just part of Digital Soldier.

A primary talking point is “open architecture,’’ which is intended to make adding, upgrading and swapping components easy. For example, Dillon, a jumpmaster and highly decorated Army officer (Legion of Merit, Bronze Star Medal with Valor Device and Oak Leaf Cluster are on an impressive resume that includes a master’s from Stanford and bachelor’s from West Point) talks about the “Christmas tree’’ effect.

“Soldiers have all of these great pieces of equipment,’’ he said, “but they’re hanging off them like an ornament.’’

With body armor and all the trappings, a soldier carries an added 130 pounds. That’s more than the bulky equipment soldiers had in World War II.

Open architecture is aimed at reducing that weight and providing faster upgrades to equipment on the battlefield.

“The Army has got to modernize, got to really transform how they do business,’’ Boone-Shaw said. “The acquisition process takes too long, is way too slow. Our enemies and Near Peers have watched how the military fights and the tactics while we’ve been at war for a couple of decades.

“They also have access to technology that allowed them to catch up with their capability to the U.S. The U.S. has to maintain the advantage.’’

Speed, integration using open architecture and combining fast-improving technology such as GPS and satellites, mission adaptability and maintaining military superiority are some of the buzz words and phrases involved in Digital Soldier.

But, Dillon said, Booz Allen sets itself apart from other firms by taking a “holistic’’ approach to consider the individual. He compared the approach to the way an NFL team maintains assets such as a valuable player through everything from nutrition and condition to the best equipment and devices. These allow for better and faster decision making on the battlefield.

“I don’t know if there’s anything more valuable than the sons and daughters of our citizens,’’ he said.

Digital Soldier, Dillion said, has been initiated to give those sons and daughters their best chance at readiness, lethality, and survivability. Combining technology and making it work “synergistically’’ can produce a soldier who will be “unbeatable on the battlefield.’’

“We want to give them the best training and best equipment to get them home safely.”