As the COVID-19 situation means more employees are teleworking, Army privacy officials are calling for caution when it comes to transmitting personally identifiable information, or PII. 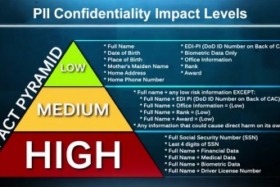 “Employees are trying to be inclusive and keep each other abreast of circumstances as teleworking expands across our organizations,” said Beth-Anne Ward, the privacy program manager for the U.S. Army Aviation and Missile Command.

Personal Identifying information is any information about an individual which can be used to distinguish or trace an individual’s identity. PII includes information such as rank, name, Social Security number, date and place of birth, mother’s maiden name, biometric data, and financial or medical records. Failure to properly protect PII could result in significant harm to individuals, to include embarrassment, inconvenience, financial loss, identity theft, and other types of distress.

“While we are limiting face-to-face discussions and relying more heavily on email, we must add that extra layer of attention and think things through before we push send,” Ward said. “Exposed PII puts both individuals and the command at risk.”

Ward cautions those who deal with this type of information to carefully consider who they copy on emails, particularly when high-impact information, such as Social Security numbers, are involved.

“Think about who really needs to have that information,” Ward said. “We must be cognizant of all recipients and limit the distribution to those with a need to know.”

Email that includes PII must be encrypted and the subject heading must include “FOUO – PII” or “UNCLASSIFIED//FOUO PROTECTED BY PRIVACY ACT.” The subject marking calls attention to the email content, and hopefully prevents careless forwarding to those without a need to know, Ward said.

“PII data elements require protective handling and safeguarding,” Ward said. “We are reminding our workforce about those data levels to protect peoples’ private information and decrease the risk of data breaches.”

Along with emails, many employees are turning to SharePoint to boost collaboration. Ward cautions that those who need to use SharePoint for PII must contact administrators to ensure their site is secured.

“Otherwise, Social Security numbers do not belong on SharePoint,” she said.

“Protecting sensitive information is everyone’s business,” said AMCOM Chief of Staff Col. Rick Zampelli. “Anyone who suspects a breach or receives unencrypted PII should report it to privacy officials.”

“Breaches have a negative effect,” Ward said. “However, we know mistakes happen. I encourage people to report so we can minimize the impact.”

Following the Association of the United States Army announcement that the 2020 Global Force Symposium & Exposition has officially been cancelled due to the ongoing public health threat, the Huntsville/Madison County Convention & Visitors Bureau  offered reassurances that the Rocket City remains a welcoming destination for conferences, tradeshows, and other events.

The Global Force Symposium is one of the largest conferences Huntsville hosts annually, bringing together more than 6,000 attendees and representing an estimated $3.6 million in economic impact.

“We understand AUSA’s desire to prioritize the health and safety of their delegates, and look forward to welcoming them in 2021. Going forward, the CVB will continue to work with our hospitality partners and public health officials to ensure that the health and safety of our visitors remains a top priority,” said Judy Ryals, President/CEO of the CVB. “Supporting our local hospitality industry is also of utmost importance – as travel is impacted, we encourage our residents to explore their own backyard and be patrons to our Huntsville/Madison County restaurants, attractions, hotels, and others.”

Jamie Koshofer, vice president of conventions, said the CVB has worked closely with AUSA over the past year.

“AUSA has long been a close partner of the CVB, and we will continue to provide support for them in all ways that we can,” Koshofer said. “2021 is right around the corner, and we look forward to bringing that business back to the Rocket City.”

Huntsville Mayor Tommy Battle said he is disappointed in the cancellation but the city and AUSA have a strong partnership.

“The City of Huntsville has developed a great partnership with AUSA over the past several years,” Battle said. “While we share in the disappointment of the community, we respect their decision to make the health of AUSA members, participants and our citizens a top priority.

“We will continue to work with them and look forward to seeing AUSA in Huntsville in the coming years.”

Currently, there have been no official reported coronavirus cases in Alabama.

The school will serve community families and those commuting to the office park or the Arsenal. The 22,000-square-foot facility will be the seventh location opened by the “2019 Best of Birmingham — Preschool and Daycare” award recipient.

“We are excited to work once again with TurnerBatson on the innovative new model for Ardent Preschool that will be built outside of Redstone Arsenal,” said Ardent CEO John LaBreche. “The two new locations recently built in the Hoover area have been well-received by parents seeking the highest quality of care for their children.

“Our goal is to offer parents in the Huntsville area a childcare experience that will be a delight for the entire family.”

The general contractor is Murray Building Company and TJ Lee with Leeland Ventures will be the local developer bringing more than 25 years of experience to the industry.

U.S. Sen. Doug Jones (D-Ala.) recently sat down with the Huntsville Business Journal at Huntsville West and discussed several issues important to our state and nation. This is the final installment of five reports from the interview. Today’s topic is the military and military families.

HBJ: Huntsville is a military town, nicknamed “Pentagon South.” Tell us what is going on with military spending and families. 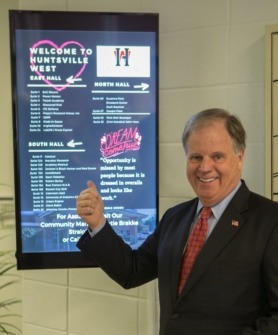 Sen. Jones: I’m on the Armed Services Committee. Alabama is extremely important to the nation’s security and our military forces. One of the things that we are trying to do, working with the administration, is to upgrade our military forces across the board.

We’ve got to spend money to upgrade what they call the “nuclear triad” of missiles for protection. We’ve got to upgrade submarines, planes, you name it. It’s all aging and we’re going to have to spend some money.

What we’re looking at now, is a whole new area of potential war and conflict. It’s not just in the air or sea or land anymore; it’s in space. This year, in the NDAA (National Defense Authorization Act), we’ve created the Space Force. I’m hoping the Space Command will come here to Huntsville. That decision is going to come relatively soon.

The other thing I’ve focused was families, our servicemen and women. There’s a 3.1 percent increase this year in the salaries for service members, which is the first one they’ve had in a while.

We’ve also done things to put extra money into education, trying to help the kids of service members that move around a lot, and also for kids with disabilities.

HBJ: What piece of military legislation stands out for you?

Sen. Jones: The biggest thing that I’m proudest of, after a 30-year fight, is the work that I did in the Senate this year to get the military widows’ tax eliminated for good. It was a really, really big deal. 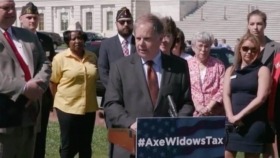 Sen. Jones on widows’ tax: “Getting this tax eliminated was more than just a job for us, it was a mission; it was a cause.”

There was a statutory set of money that the VA has administered for a long time.

Those funds were to be distributed to widows when a service member dies in combat or of a service-related injury. In many cases, service members buy additional insurance to provide additional benefits for their families. That money is administered by the Department of Defense and it’s something that service members pay for – out of their own pockets.

About 35  years ago, Congress passed legislation allowing the Department of Defense and the VA to offset the two.

If a widow was entitled to both pots of money, they’d only get 55 percent. This means money that service members have paid into – was going to the Department of Defense and staying there.

I didn’t know about it, never heard about it and then some of the Gold Star widows came to us and talked about it.

I just about blew a gasket. How can that be?

They showed me that it has been tried for 20 years to overturn and I told them, “This year, we’re going to do something different.”

It’s a commitment that was made to our service members that the federal government and Congress has fallen down on. Getting this tax eliminated was more than just a job for us, it was a mission; it was a cause. Everyone in the office chipped in; we ended up getting close to 80 co-sponsors in a very partisan senate.

I got Susan Collins (R-Maine) to co-sponsor it with me in the Senate. Together, we got so many co-sponsors, we organized it like a political campaign.

Every recess, every town hall, there was somebody there, asking about the military widows’ tax.

It got to the point that when it went up to Congress, the negotiators for the NDAA said, “We’ve just got do this.”

When it passed, there were about 25 to 30 of those Gold Star widows up in the gallery.

It was awesome. It was really, really awesome.

I’ve got to tell you, I’ve never been with a group of people so appreciative of an act of Congress as those military widows, it has been remarkable.