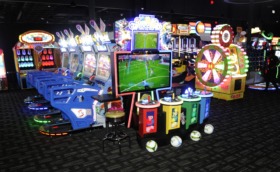 There are some 125 games ready to play at Dave & Buster’s. (Photo/Eric Schultz)

Even the old school games have new age twists.

Starting Aug. 19, the grand opening of Huntsville’s Dave & Buster’s Sports Bar — or restaurant and adult/family entertainment venue — patrons could play the iconic 1980s video game “Pac-Man” in the “Million Dollar Midway” at the newest business to open at MidCity District in Huntsville.

But this is not your father’s version of the classic arcade staple.

This century’s “Pac-Man” features a four-person Battle Royale where contestants eliminate others by eating them on a state-of-the-art big screen.

“Pac-man” is one of 125 games in D&B’s entertainment section.

“The technology involved really is the latest and greatest in terms of modernization,” said Eric Drescher, the store’s general manager and a 20-year veteran of the restaurant scene in the region.

The high-tech stuff contines throughout the Midway. There are the classic standards such Pac-Man, Pop-A-Shot and Skee-Ball. Some games have virtual reality and others are based on themes surrounding “Jurassic Park,” “Star Wars” and “Men In Black.”

As some 200-plus new hires went through training days before the grand opening, a walk through the Midway had a feeling of the last quarter of the 20th century blending into the new millennium.

At the back of the Midway, ticket winners can shop for prizes ranging from candy to PlayStations in the Winner’s Circle. 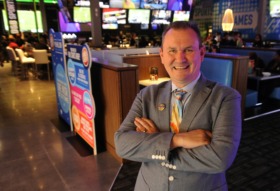 D&B’s next calling card is the restaurant/sports bar area. A full bar divides one eating section from a full dining room and dissects a room that features garage-style doors that close off a meeting room for around 50 people.

Drescher said the setting is perfect for any type of private function, even midday.

“At lunch, we can get them in and get them out,” he said. “They have a great lunch experience and come back at night with their family and have a great game experience.”

Among the televisions that can be seen from every angle around the restaurant and bar are four that measure at 169 inches. The decorative walls reflect a state and regional flavor when it comes to sports teams.

“We have the best sports viewing in town,” Drescher said. “If there’s a game, on the chances are we have it and, if we don’t, we can get it.”

Drescher said if certain games — Alabama and Auburn football, for example — are being televised, the sound will also be turned up.

After all, he said, his restaurant is seeking to provide ultimate entertainment.

“Dave and Buster’s is such a different entity because of the games and high-quality food and amazing drinks.” he said. “It’s not just a restaurant. It’s not a game room. It’s a full experience …”

Many employment opportunities are coming to town these days, and another one is happening now in Huntsville’s new MidCity.

The new development that has already seen the opening of TopGolf and High Point Climbing and Fitness is preparing for the opening of the unique adult entertainment venue Dave & Buster’s.

D&B’s bills itself as, “The only place to eat, drink, play and watch sports all under one roof!” The 26,500-square foot has targeted Aug. 19 for a grand opening.

“We’re looking for a little over 200 team members,’’ said General Manager Eric Drescher. “We’ve got all positions from front desk to kitchen to bartenders and servers.

“We also have technical positions.’’

Applications will be accepted at the restaurant in MidCity located at the old Madison Square Mall campus on University Drive.

Drescher said D&B’s offers the “latest and greatest” adult entertainment games as well as traditional games. There’s a full-service restaurant with what he called “amazing food’’ and a large bar that would “rival’’ any.

Drescher is a 20-year veteran of the Huntsville area food scene who “picked Huntsville,’’ he said, when given the opportunity open to D&B’s second location in Alabama.