Up until now, he was one of only a handful of people on Earth who knows what it feels like to go through self-quarantine, and live with other people in a small, confined space for more than five weeks.

Retired NASA astronaut and Navy pilot Robert “Hoot” Gibson was a bit puckish with his opening advice to the Huntsville-Madison County Chamber of Commerce on a teleconference this week. 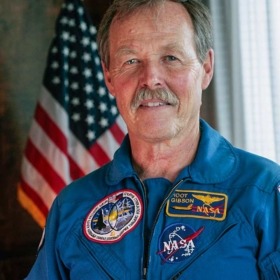 “Well, we had a big advantage once we got into orbit,” he said. “We were flying at zero gravity or weightlessness so when the floor got cluttered, we just floated to the upper deck. When your floor at home gets cluttered with too many people and their stuff, just fly over the top … okay, okay, that is not meant to be serious,” he said to laughter.

A resident of Murfreesboro, Tenn., and still a familiar face at Space Camp graduations, Gibson is no stranger to living in close quarters. He flew five space shuttle missions and spent 36 days with up to seven astronauts in the tight quarters of the shuttle.

Vice President of Communications for the Chamber Claire Aiello asked him about his experiences then and now as people find themselves confined to home for the first time during the coronavirus pandemic.

“We really did have an advantage in that a crew is formed months before launch and we trained together for a year, knew each other very well by the time we actually went into space, we knew exactly what we were going to face, and we had experience with the tight confines of the space shuttle,” he said.

“On three of my five missions, we had 8 feet by 15 feet on the upper deck, and on the lower deck, we had about 15 feet by 15 feet. Two of my missions, we did not have the Spacelab, which gave us double that much room, about 5,000 square feet, so comparatively speaking, we had a lot of room.

“But if I think back on it, the mission where I would say, ‘How in the world did we not strangle each other?’, that was my second mission. There were seven of us aboard and we only had the flight deck and the mid-deck, 2,500 square feet for all of us to live in.”

He said being in space was easier that preparing for it in the simulator because they couldn’t fly and couldn’t use the ceiling.

He said containing the coronavirus has been a challenge for most because few people have ever been quarantined at all and in the case of COVID-19, there was little time to prepare before they were asked to self-quarantine with no previous knowledge or experience doing it.

“Again, as a crew we had the advantage of going into quarantine seven days before we launched,” Gibson said. “That kept us away from anyone who could give us the flu or any kind of disease. And anyone who came within 15 feet of one us, would have had to have passed a physical by one of our NASA flight surgeons.”

He said he never flew a mission where anyone had a cold or flu outbreak, or any illness at all.

“And then there is your own personal attitude toward it,” said Gibson. “We never had a crew member who was grumpy or difficult to work with, or who said, ‘I need all these people out of my hair’, you know. We never heard anything like that, so I think attitude is probably the biggest part.”

He said a thankful attitude helps too, in which they are going into quarantine because that’s what it will take to protect them and the people with whom they come into contact.

“We have all been self-quarantining everywhere, trying to stay six feet apart and I think it has for the most part worked,” Gibson said.

The lessons of aerospace he said are training, simulation, preparation, having a plan, and executing the plan.

“We had a saying in flight-testing: plan the flight and fly the plan and don’t deviate,” Gibson said. “I say the more rigorous we are, the more adherence to the plan we can do, and the better off we are going to be. It has paid off (so far) and it works. 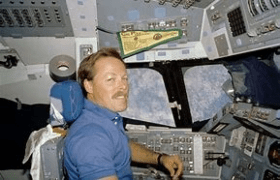 Gibson in the cockpit of the Space Shuttle Discovery. (NASA Photo)

“Things that work are good. That is the attitude to take toward it.”

Gibson said his family and neighbors have obeyed the stay at home orders, but they are getting a little more ambitious. A doctor in the neighborhood suggested bringing their own folding chairs and having 5 o’clock Happy Hour – six feet apart. Gibson has even hosted one himself.

“Cautious optimism is where I’m headed in the days ahead,” he said. “But another thing we have been sure to do is order food from local restaurants to help keep them in business. Panera Bread delivers and there are others where you drive there and pick it up.

“One restaurant we go to said to us, ‘Thank goodness for the people in Murfreesboro!’ He initially laid-off all of his employees, but because of the support he is getting from people here in town, he’s hired back five of them, so I think we can all help.”

Responding to a question about 5:00 Happy Hour in the cul-de-sac compared to 5:00 in the cockpit of a spacecraft, Gibson quips, “We weren’t supposed to have cocktails in orbit and of course I never did – unless you count that thing with the Russians … but that’s a whole other story!”

Speaking of Russians … he was asked whether it was true that he helped end the Cold War.

“When we docked with the Russian Space station Mir, it was 1995 and only the second international docking, 20 years after the Apollo Soyuz docking in 1975,” said Gibson. “When we arrived, the protocol was that I would shake hands with the Mir commander. I was the Space Shuttle commander, and so the plan was the two of us would shake hands in the hatch,

“I opened the hatch and shook hands with Russian Air Force Col. Vladimir Dezhurov. He had been a Russian fighter pilot training to shoot down and kill me all those years I was trained to shoot down and kill him. That day, President Bill Clinton made the comment, ‘Well I guess this means the Cold War is over.’

“I tell everyone I ended the Cold War – it’s a little bit of a joke!”

“What was your favorite plane to fly?” asked Cherry. 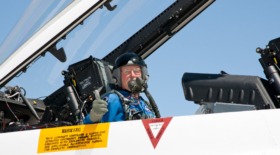 Gibson gives a ‘thumbs up’ in the Tomcat. (NASA Photo)

“Initially, I flew the F-4 in Vietnam, and flew two cruises over the Coral Sea in it. After the Phantom, I flew the first F-14 Tomcat and of course that’s the airplane that was in the movie ‘Top Gun,’” Gibson said. “It could do everything the Phantom could do and, at the time, the Phantom was the world’s best all-around fighter plane.

“When the Tomcat came out, it could do everything the Phantom could do 15 to 20 percent better, so it was a superior airplane and it should have been. It had 15 years of evolution over the Phantom.

“Both were a lot of fun. Flying jet fighters was really something!”

No one on the call could resist asking – where did he get his call sign “Hoot” Gibson?

“I joined a squadron aboard the aircraft carrier USS Coral Sea in 1972,” he said. “I was a new guy and the operations officer looked at me and said, “Hey kid. You got a nickname?’ 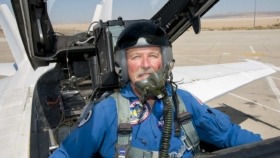 “From that moment on, April 1972, I’ve been ‘Hoot’ Gibson. It went on the canopy of my airplane, on my coffee cup, and Hoot Gibson was sewn onto my flight suit.”

On April 17, NASA astronauts Jessica Meir and Drew Morgan, and Russian cosmonaut Oleg Skripochka returned to Earth after nearly a year on the International Space Station. They returned to an Earth where people are wearing masks and where they have been living in a sort of quarantine.

What does Hoot Gibson think it is like for them?

“I’m sure Mission Control has told them all about what’s going on, and what life is like back here on Earth,” Gibson said. “I suspect they’re going to be a bit dismayed because they’re not going to be quite prepared for what they’re going to see because it’s far more dramatic than it comes across to you by someone explaining it to you.

“When you come back from space, it’s always such a joyous celebration with everybody enthusiastically hugging everybody and shaking hands. They’re not going to get any of that, so it’s going to be a little bit of a letdown I’m sure after the experience of flying in space, which is pretty spectacular.”