New economic impact numbers have been released and according to the Huntsville Madison County Chamber of Commerce Research Director Ken Smith, they provide a snapshot into exactly what kind of impact COVID-19 has had on our local economy, and how that information compares to the national numbers. 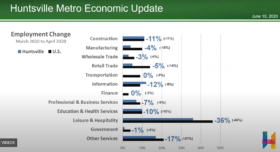 While there is some bad news in the data, albeit expected; there is quite a bit a good news going forward as Huntsville proves to be overwhelmingly resilient.

According to Smith’s presentation on a recent teleconference call with Chamber members, there was a big dip in employment coming off March into April with Huntsville employment at 226,000. The one-month change showed an 8.3 percent dip, which Smith said is a significant drop. However, compared to the U.S. employment numbers of -13.1 percent, Huntsville stayed well ahead of the national statistics.

Furthermore, according to early calculations for May, employment has already started ticking back up, showing a 2 percent increase in employment from April to May.

“We are looking at what analysts are saying is a two-year recovery for GDP and a possible three-year recovery for employment to get back to pre-pandemic levels,” said Smith. “We are about 7.5 percent below where we were this time last year, as compared to 13 percent for the U.S. economy. That translates into 10.6 percent unemployment locally, which is a big jump, but not bad when compared to the U.S., which was up to 14.4 percent.

“The Federal Reserve recently announced they are not likely to raise interest rates until after the year 2022. So this gives us hope and a sign it will be the same for the local Huntsville economy, and it will rebound, which falls in line with what the Federal Reserve has been predicting.”

Looking at the two-year picture, backing up to January 2018, the numbers show the precipitous drop in April wiped out any gains over the past few years, and the same can be said for the U.S. economy, which lost 20,000,000 workers over the past month. It added back 3 million in May.

“We at the Chamber use trends in our marketing to potential new clients interested in moving their business into the area,” said Smith. “They like to see that our economy is strong.

“If you look out over 20 years instead of two years, you can see Huntsville’s employment growth is about twice the rate of the U.S. and it has been trending that way since 2000.

Smith’s data charts show the dip in 2008, which was the recession. It took Huntsville about five years to recover and get employment back to pre-recession levels. It took the U.S. six years.

“But what they’re predicting now is a larger drop but a shorter recovery,” said Smith. “That is a three-year recovery in employment and four years for the U.S. to recover.”

Looking at employment by industry, there are no surprises.

The biggest local job loss was in the leisure and hospitality industry, losing 8,000 jobs from March to April. That includes all the arts, entertainment, and recreation, and hotel and food services.

The second biggest loss for Huntsville was in professional and business services.

Huntsville lost 4,100 jobs during that same time period, and where engineering and technology workers did not see a big job loss, the losses were in support services such as office and administrative, cleaning services, document preparation, and employment services. With companies closed or people working from home, there was a lot less need for some of that support.

The third largest drop was some 1,500 jobs in a sector that included repair and maintenance businesses, hair and nail salons, and nonprofit organizations. 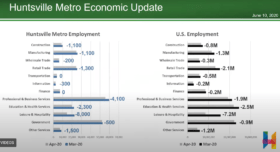 “Huntsville dropped about 36 percent, so we see over one-third unemployment in leisure and hospitality, where the U.S. lost almost half in that sector at about 46 percent,” said Smith. “Huntsville expects to gain it back.”

In areas where Huntsville fared pretty well, the retail trade industries only lost about 5 percent, compared to the U.S. at about 14 percent.

Huntsville also did well in manufacturing, losing only about 4 percent compared to the U.S. losing about 10 percent overall.

In the areas of construction, wholesale trade, and transportation, Huntsville lost very few jobs compared to the national numbers, but transportation is not a very big industry in the local market.

Huntsville also did not lose many jobs in finance or in the government sector.

Looking at the good news, Moody’s Analytics did an analysis at the end of May showing a sharp drop with a continued recovery through the rest of this year 2020.

“A lot of people might think, ‘Well, all we did was put on the brakes. Why can’t we just start right back up and go back to where we were two months ago?’,” said Smith. “That’s typically not going to happen. We saw after the 2008 recession it took five years to get back to pre-recession levels.

“Here, they are expecting a recovery, but not an immediate one. Huntsville is looking at two years for GDP and three years for the employment to recover, which is one year earlier than the U.S.

Why is Huntsville’s recovery faster than the U.S.?

Moody’s points to some of the area’s key strengths.

“It’s interesting to see how the short-term and long-term statistics show us in expansion mode, which is pretty positive,” said Smith.

Some of those strengths are Huntsville’s extremely highly skilled and educated workforce in areas of advanced manufacturing at key companies like Mazda Toyota, for example; and research jobs such as those at Blue Origin and Aerojet Rocketdyne. Moody’s mentions all three specifically.

Huntsville’s robust population growth and favorable migration is part of it too. It comes on the heels of new population numbers recently released showing Huntsville’s population hitting over 200,000 for the very first time, so that is definitely something to note. 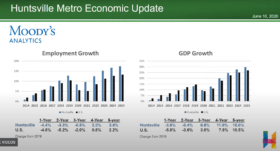 In terms of weaknesses, Smith said Huntsville still gets knocked down because of our dependence on the government sector with an underrepresented private sector.

Also wage growth is slow, due in part to a higher-educated workforce whose wages are already on the upper end, so there is less room to grow.

“Lastly, if we look into the Moody’s forecast a little more deeply, you can see the year-by-year percent growth, and you can see where we were trending before 2019,” said Smith. “We were outpacing the U.S. economy in growth and jobs so this is why we say Huntsville’s economic recovery and employment growth is better, and will be faster than the U.S.”

Smith also said the Chamber still has companies interested in locating their businesses in the Huntsville community and they are working on several projects on the commercial side.

“We are still seeing a lot of investment companies and private investors looking to continue their projects here, so from the Chamber perspective, we are primed and ready!

“It’s a very difficult time for many people, especially small business, but the balance of the skilled workforce and job growth makes Huntsville residents better able to support their families than some,” said Chamber President and CEO Chip Cherry. “There’s a lot of job growth and information that shows companies are hiring, and there is a lot going on Redstone Arsenal too, so there are still a lot of opportunities in this market.

“We are not recession-proof, but we are a lot more resilient than some,” Cherry said.