Dynetics recently unveiled a test version of its full-scale lunar lander that the company hopes will take people to the moon.

The Dynetics test article will be used for initial evaluations for NASA’s Artemis program,, Dynetics said in a statement. The Dynetics team will use the test article for analysis, crew module accommodations, placement and orientation of various components and overall habitability.

The mockup includes the crew module, autonomous logistics platform for all-moon cargo access, ascent and descent propellant tanks and deployable solar arrays. This low-slung design could allow for easier and safer access to the lunar surface. 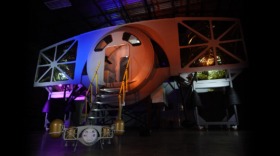 “Our team is pleased to bring this system to life,” Kim Doering, Dynetics Vice President of Space Systems, said in a statement. “Our reusable, sustainable approach is ready to support a safe and successful hardware delivery for NASA’s mission.”

The focus of the test article rests on crew interfaces, enabling the team to test crew activities within the module. The flexible design is readily reconfigurable, allowing the human systems integration team and flight crew to review and provide feedback on early concept designs and execute quick-turn iterations.

The test article was constructed just three months after the start of the contract and was built and delivered in collaboration with LSINC, a Huntsville-based subcontractor.

Huntsville-based Dynetics, a wholly owned subsidiary of Leidos, is competing with  is one of three prime contractors selected to design a lander for the NASA’s Artemis Human Landing System Program managed at NASA’s Marshall Space Flight Center.

Masks and More Masks: “Celebrating” Halloween in the Time of CO...