There has been nothing but beautiful music coming from the Singing River Trail project since Dr. John Kvach took over as its first executive director in July. 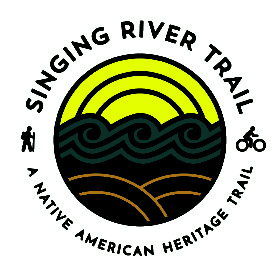 Unveiled last year by the Land Use Committee of Huntsville’s Launch 2035, the Singing River Trail is the committee’s most ambitious legacy project. It connects the North Alabama region to its rich history and preserving its pristine environment – originally consisting of 70 miles of walking, biking, and hiking trails and greenways.

However, the trail is kicking off 2021 with several significant accomplishments.

Kvach was on hand to announce the opening of four miles of the Hays Farm Greenway that includes an early intersection with the vast Singing River Trail network. The ribbon-cutting highlighted the partnership the trail has with south Huntsville, the city of Huntsville, Hays Farm, and South Huntsville Main Business Association, and stirred the interest of other potential corporate partners.

The Singing River Trail at Hays Farm merges the local greenway into the larger SRT footprint.

“The Singing River Trail is open for business along 2 1/2 miles of Haysland Road just south of the new Grissom High School,” he said.

Perhaps the biggest news to come out in 2021 is the new and much expanded trail map.

Originally planned as a 70-mile, three-county project, it has grown into a 150-mile, eight-county project under Kvach’s leadership, connecting North Alabama from Bridgeport/Scottsboro to Sheffield, bringing it within 16 miles of the Natchez Trace.

Kvach has met with state legislators, mayors and city officials to increase awareness and possible funding sources. And he is working on a feasibility study for a section of the trail that will run from Scottsboro to Guntersville to Huntsville.

“We are now partnering with the National Park Service as we focus on the Deas-Whiteleay Trail of Tears Overland Route as the western expansion route,” he said. “And we can now call Athens State University a partner after it proactively reached out to to make sure the trail will be part of their campus.”

The National Park Service and Muscle Shoals Heritage Area are also in talks as the trail grows.

The trail has received funding from the state of Alabama, and the Community Foundation awarded a Compass Society grant for $11,000 for a new and more engaging website design promoting their “Get Outside Alabama” campaign. Kvach has also been working on a corporate-giving strategy and development packet that will allow the trail to pursue public and private money.

“We are currently working toward funding two design projects at the Huntsville International Airport, a trail route feasibility study in Athens, website work in collaboration in Decatur/Morgan County Tourism, and funding for a master plan from Bridgeport/Scottsboro to Huntsville and from Decatur to Sheffield/Florence,” Kvach said.

“Because the trail is a nonprofit tasked with raising its own operating expenses and funding, we will begin working with the state Legislature to pass a resolution of support on behalf of the Singing River Trail in 2021, and to find a line on the state budget for recreational, educational, and cultural/historical programing and to help with economic development along the trail.

Kvach said despite COVID-19 numbers rising in North Alabama going into the first of the year, he has seen an increase in interest about the trail.

“Outdoor recreation, hospitality, and engagement are becoming more commonly accepted and desired,” he said. “The trail has been working with two new partners in Huntsville who will rely on the trail as a source of alternative transportation, and as a way to highlight safe and fun outdoor activities and engagement.

“Taking a negative and making it a positive is working well with community partners.”