In 2019, the city of Huntsville played a duet in economy and song.

The Huntsville Music Initiative was launched, accompanied by a citywide music audit to celebrate the music industry’s significant impact on the city, with the understanding that impact could be significantly more.

One of the initial recommendations coming from the music audit was the need for a board of professionals and people in the local music industry, to help guide the city in implementing a strategy. 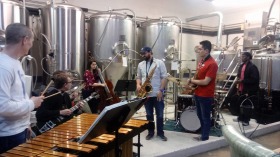 According to Dennis Madsen, the city’s manager of Urban & Long-Range Planning who also oversees the Music Initiative, Huntsville has always been creative in its approach to economic development.

Redstone Arsenal is No. 1 when it comes to Huntsville’s economic driver, but there are other means the rest of the city can support it by diversifying. Similar to the diversity of businesses in Cummings Research Park and the burgeoning automotive manufacturing industry in Limestone County, Madsen said there is a huge driving music industry opportunity in Huntsville that if nurtured, could really grow.

“A growing music industry will do great things for our quality of life and create a whole other job and economic sector in Huntsville,” said Madsen. “That was the big motivation behind doing the music audit and creating the Board.”

Madsen uses the city’s Industrial Development Board as an example.

One might think COVID stopped the concerto right in the middle of the third movement, but instead, the board took its meetings virtual the rest of 2020 and the list of accomplishments built a base to work on in 2021.

First, a Spotify playlist was established which shared local music from a variety of genres; and they also shared their own playlists as a great way to get more exposure for their own work.

The Board created a charter and a webpage and developed a resource guide for artists negatively impacted by COVID-19, currently on the City’s website, to share ways in which they can reach out and get help.

They also formed committees on things like marketing; education, looking at strategies for engaging in schools with low-cost instrument rentals; and they formed an events committee to create a calendar, that hasn’t been implemented yet, but will be a one-stop-shop and central clearinghouse for people wanting to know about local and regional music events.

Music Board member Mario Maitland, founder of the Maitland Conservatory in Huntsville, is on the education committee. He started his music school to offer students ages 2 to 76, a modern application of music and the arts. 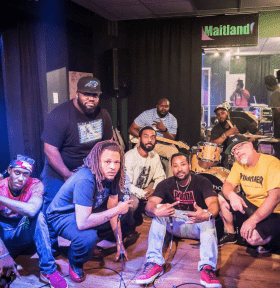 “We focus on the careers that can be created from the arts. A lot of time, the arts get stuck in this box of, ‘It’s cute to take piano lessons or violin lessons’ and maybe one day you can play in church,” he said. “But we don’t really talk about, nor do we really expose people to, how to take traditional arts school training and apply it to modern careers in music production, film scoring, deejaying, video editing, even vlogging and podcasting.”

As a Music Board member, he said the ultimate goal is to get people thinking about music as a sustainable economic engine. And, once it gets going, music creates jobs and residual income in businesses connected to it.

“Everyone loves entertainment, everyone loves music, and they want to go out and enjoy it, but they are not really used to paying for it,” said Maitland. “We’re trying to promote this culture of paying for your music so that we can really push the whole idea of a music economy.

“We don’t want these individual music venues to exist as silos. We want them interwoven. That is how we help to cultivate the music scene. But then we want to take it a step further: How can we interconnect all of those things to really create a cohesive music economy?”

The board also met to establish a music policy handbook.

Among the most important policies is initial research into noise ordinances and how they impact artists planning musical events. It lays out a plan for how the board can work with the city to clarify those ordinances, and make it easier for artists, venues, businesses and residents to comply to those policies.

“Noise ordinances and policies are important because you will be faced with conflicts between venues and nearby businesses and residences,” said Madsen. “The Music Board will set a policy to mediate these things that says essentially, whoever was there first has the right to do what they were doing. Whoever comes in afterwards, has to take that into account and is responsible for attenuating the noise.”

Madsen said the city has been talking about an amphitheater in Huntsville for a long time. The idea of the MidCity Amphitheater dovetailed with the opening of the VBC Mars Music Hall. 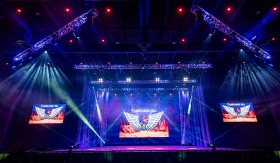 “The Mars Music Hall has been incredibly well received not just by audiences but by artists who say it is a great place to play,” said Madsen. “We recognize the need for something along the lines of an 8,000-seat outdoor venue that can attract a certain level of artists who are on the national circuit.

“What came out of the music audit was an affirmation of that. This market is big enough for something like that, but it is also big enough for meeting a broader variety of event venues.”

The Music Initiative also seeks to partner with the unique independent music culture and history of places such as Florence and Muscle Shoals, and to share artists from there and Huntsville to encourage a cross-cultural exchange.

“But we are even looking beyond that,” said Madsen. “We are adjacent to what is known as the Americana Music Triangle that incorporates the major music cities in the Southeast. We will never be Nashville, but how can Huntsville become part of that broad music culture exchange so young and aspiring artists can cut their teeth in the regional music ecosystem and go on to hit the bigger stages.”

Another issue to come out of the audit was the need for more public events. 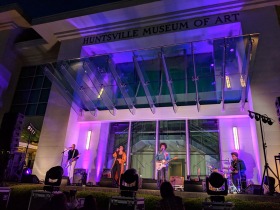 Impossible last year due to COVID, there are now discussions about restarting Big Spring Jam or, once we are on the backside of COVID, to create a signature Huntsville Music and Arts Festival.

Board member Codie Gopher has several ideas about this.

By day, Gopher designs attack helicopters on Redstone Arsenal, but his true love is music, and he is fully committed to developing and supporting local talent.

He founded the Huntsville Hip Hop Tech Conference more than five years ago, bringing in music leaders from around the globe, and has consistently focused on subjects such as hip hop tech production development, teaching music technology in Huntsville/Madison County schools, the global influence of hip hop, and the future of STREAM (Science, Technology, Reading, Engineering, Arts, Mathematics).

“Codie G. is a very influential member of the hip hop community here and he has been promoting the idea of 256 Day,” said Madsen. “256 is the local area code, but the 256th day of the year falls in mid-September, the happy zone for outdoor public events.

“It is the beginning of the private music industry starting to shape a new fall music festival, or maybe other festivals on a variety of scales, over the course of a year.”

Madsen points out that Huntsville already has a diversity of music ranging from the chamber music festival Twickenham Fest to the Hip Hop Tech Conference to the Huntsville Orchestra to the city’s robust blues, country and rock music scene.

With the city’s amphitheater coming to MidCity and an amphitheater planned for Home Place Park in Madison, as well as venues such as Toyota Field, Big Spring Park, the Mark C. Smith Concert Hall and others, the Huntsville Music Initiative seems to be hitting the high notes when it comes to musical and economic harmony.