It was an event fit for a king.

Or, as in this case, fit for the reigning Southern Professional Hockey League champion Huntsville Havoc.

In last Friday night’s home debut for the Havoc, the Von Braun Center unveiled its LED lighting system in the Propst Arena. 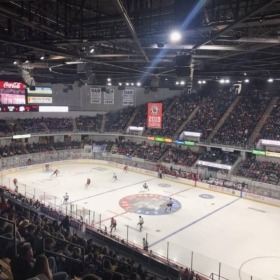 The scope of the new lighting system included the installation of 86 fixtures with programmable color-changing capabilities.  The system is estimated to deliver an annual energy savings of $45,132, along with a reduction of approximately $8,923 in annual arena lighting maintenance costs.  The $340,000 lighting upgrade is being paid for through the VBC’s capital funding.

The system features full color-tuning fixtures to enhance events with colorful light shows and other lighting experiences.  With this upgrade, the options for a completely integrated lighting system for events is unlimited and will result in an enhanced fan experience, as well as improved viewing opportunities of both live and televised events.

The man behind the hottest ticket in town last month entered professional minor league sports with no experience in the field and no grand plans on how to make his venture a success.

But Keith Jeffries, owner of the back-to-back and three-time Southern Professional Hockey League champion Huntsville Havoc, also didn’t jump in with eyes closed and without a guiding light.

He leaned on a principle that can be found in the name of his former business — Golden Rule Printing.

“It goes back to when I went into business early in life, when I was in my early 20s,’’ Jeffries said. “My dad told me the key has always been good customer service. The name we had was Golden Rule and it came from the idea of how to treat people, whether they were customers or employees, to try to treat people the way you’d want to be treated as a customer or employee.

“We try to do the same thing here. We’re not perfect, but we’re getting better. If I was a fan or season ticket holder — how would I want to be treated? Some things are out of our control, but we still do the best with what we have.’’

That best resulted in four straight seasons where the Havoc set SPHL attendance records. Sellouts are common, and the team defeated the Birmingham Bulls at a packed, raucous VBC Propst Arena on April 27 to add to previous titles in 2010 and 2018.

Winning certainly helps drive attendance. So does cozy relations with the VBC’s Steve Maples and Mike Vojticek. Concession sales have soared at the renovated Propst Arena.

But a major part of the Havoc’s successful formula is Jeffries.

Ashley Balch, the team president, would know. He’s been with the franchise since its inception 15 years ago when the team played for one year as the Channel Cats. And he was there when the Havoc won 11 games in 2014-15, then set its first attendance record the following season.

“(The key) is commitment from ownership, the commitment from Keith and Becky Jeffries,’’ Balch said. “Keith doesn’t own any other business. They’re not doing this just for fun. This has become their life.

“They’ve made my family part of their family. The way they treat their employees makes you want to make them proud. You want to do a good job for them.’’

It certainly doesn’t hurt the Havoc’s bottom line that the city and area has transplants from hockey-crazed regions and an ever-growing population. And the team returns the favor by giving the city yet another reason for the growth.

“Keith does a great show and it’s been a great year for the team,’’ said Huntsville Mayor Tommy Battle. “It’s something most people don’t expect when they come here. The interesting thing is people come here and you’ve got to have something to draw people to downtown and keep people downtown.

“It’s just part of your draw for the VBC and the downtown area. It all blends together into something that makes a community.’’

Before the puck dropped on the inaugural 2004-05 season Jeffries did some homework. He talked to Ron Evans, the former VBC director, and others. He listened and heard what worked and what didn’t as minor league professional teams from hockey, basketball and, eventually, indoor football came and went.

“A lot of the business models of the past were maybe — flawed a little?’’ Jeffries said. “The thing that helped us from the very beginning and continues to help us is the partnership we have with the (VBC). How many owners and buildings have a love-hate relationship and compete? By co-promoting this (team) with the building, we both make money when we put people in the building.’’

Jeffries’ game plan for business success has evolved over 15 years. He said he “obviously’’ spends no money on newspaper advertising since there is no daily newspaper in Huntsville and spends “very little’’ on television and radio spots. The Havoc focus is on social media and reaching out to those who already know the team.

“We spend more time interacting with people who come to our games,’’ he said. “We know they like it and might bring somebody with them.’’

It should be noted that in the SPHL, unlike minor league baseball clubs affiliated with Major League teams, coaches and players are not paid by the big league club.

Jeffries said he doesn’t have a lot of money to open his pockets for charity, since the Havoc is a mom-and-pop operation, but is proud the franchise can give back to the community and charities in different ways because of its profile.