(This is the second and final installment of a two-part story on the area’s growing economy.)

Recently, Huntsville Mayor Tommy Battle shared his vision for Huntsville in terms of an average sized pie. He, along with business owners and civic officials, stood at city center – what Battle calls Huntsville’s “living room” – and looked out in every direction to the edges of the pie’s crust. 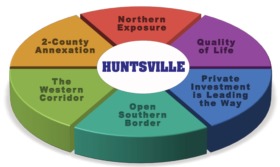 What they see are active growth corridors ushering in a significant expansion of the original Huntsville pie, which is accelerating economic growth throughout the North Alabama region.

“Instead of dividing the pie into fifteen different pieces that get smaller the more users you add, we made the whole pie bigger so we could divide it up differently with more restaurants, entertainment and activity venues, more places to spend retail dollars,” he said. “With a bigger pie, each slice is more valuable.”

The success of Twickenham Square, a multi-use development built right in the heart of downtown Huntsville’s medical district and anchored by The Artisan luxury apartments and a Publix, has spurred the development of four more multi-use (multi-purpose or mixed-use) sites in the downtown area.

These developments require the right balance of residential, retail, and commercial space, usually surrounded by a pedestrian-friendly traffic pattern, walking trails and/or parks, and plenty of amenities and activities.

Sealy Realty’s Avenue Huntsville (and the new Avenue Madison); CityCentre at Big Spring with the new AC Hotel by Marriott; the long-awaited Constellation, breaking ground this fall on the old Heart of Huntsville site at Clinton Avenue; and a new development by Rocket Development Partners on the former site of the Coca-Cola plant on Clinton Avenue across from the VBC are either already established or coming soon to downtown Huntsville.

“People ask whether mixed-use/multi-use developments are replacing traditional malls and shopping centers,” said Battle. “But I think you have to look at each one individually. People are looking for more live, work, play types of environments, but I think what we are seeing today is a shift. Is it permanent? Probably some of it is, but I won’t be surprised to see it shift back.”

Max Grelier, co-founder of RCP Companies who developed the AC Hotel as part of CityCentre, as well as MidCity District on the old Madison Square Mall property, agrees. 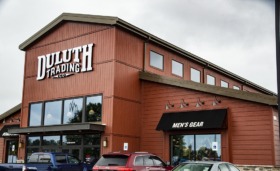 “However, retailers across most retail center formats are shrinking their footprints and using technology and distribution to keep up with the trends and competition.”

But Battle points out that many online retailers, such as Duluth Trading Company who have been online-only retailers, are building mortar-and-brick stores like the one they opened at Town Madison in June.

And even online behemoth Amazon is now putting stores throughout the U.S.

“I just got back from Nagoya, Japan where they still have huge department stores that are very active because people want to look at what they’re going to buy, touch it, experience the kind of cloth it’s made of and see how it fits,” Battle said.

“When you look at Parkway Place, they are doing very well, and we recently added an apartment component to Bridge Street Town Centre to add a ‘live’ component to it and Research Park’s work and play.

“But when you look at the old Madison Square Mall, it could be found on a site called DeadMalls.com,” Battle said. “We built a lot of malls back in the 1960s and 1970s – probably too many. I think we are now right-sizing back to what we need. There’s still a place for pure shopping like Parkway Place, but I say you need both to succeed.”

Charlie Sealy of Sealy Realty has developed several residential properties including The Belk Hudson Lofts and The Avenue Huntsville, which also has a retail component in downtown Huntsville.

Sealy is also building Avenue Madison that will have a retail and parking component in downtown Madison. He said the trend for new developments will be weighted more towards multi-use developments in the future.

“However, the older style shopping centers and malls won’t be replaced anytime soon unless they are old, obsolete, and really in need of replacement anyway,” said Sealy. “These [mixed-use] developments are definitely what residents and consumers prefer now because of the experience they produce.”

Grelier said the mixed-use developments come in a variety of styles.

“These developments are a type of urban development strategy that blends residential, commercial, cultural, institutional, and/or entertainment uses to initiate more consumer interactions by creating walkable, livable, and experiential communities,” said Grelier. “Mixed-use developments can take the form of a single building, a city block, or entire districts.

“Traditionally, human settlements have developed in mixed-use patterns; however, with industrialization of the U.S., as well as the invention of the skyscraper, governmental zoning regulations were introduced to separate different functions, such as manufacturing, from residential areas.”

Joey Ceci, president of The Breland Companies, which is developing Town Madison and the new Clift Farm project on U.S. 72 in Madison, sees it differently.

“I think we are seeing the death of the supercenter more than malls,” said Ceci. “Those centers with huge parking lots and a row of big box stores lined up next to each other – for one thing people just don’t like that huge parking field and, two, from a developer’s standpoint, if something happens and a business closes or moves out, it is very difficult to repurpose that huge space left behind by a store the size of Target or TJ Maxx. You can use a big box space for a trampoline center or an entertainment center, but you can’t put a restaurant in there.

“Multi-purpose developments are making that space work better by integrating residential into it via restaurants and everyday neighborhood retail like a dry cleaner or hair salon. The idea is to take the new urbanist movement that everyone is following and make smaller blocks of space so that if, in 20 years, that block is no longer viable, knock it down and put something else there. It’s a matter of making it more sustainable over time.”

Sustainability is the focus at Town Madison where Madison Mayor Paul Finley is looking to more than the casual Rocket City Trash Pandas fan to help build out that development. 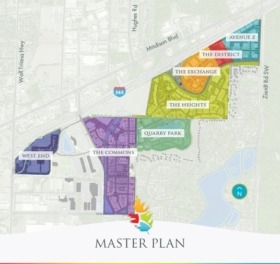 He’s getting some help from travel sports and softball/baseball recruiters and scouts who will enjoy the regional draw of the new Pro Player Park, just off Wall-Triana Highway.

“The new Pro Player Park and everything Town Madison offers will definitely get foot traffic to our hotels; however, workforce development secures regional success which will also help us locally in aspects of infrastructure and schools,” said Finley.

Finley also points to the success of the Village at Providence, one of the area’s very first mixed-use developments built in 2003, as an example of how popular pedestrian-friendly mixed-use communities have become.

“A mixed-use development offers a live-work-play experience right outside of your front door,” said Finley. “This is appealing to young professionals, established mid-lifers, and retirees alike. These developments are multigenerational that attract businesses to the area.”

“Mixed-use developments are replacing declining malls because they are often well-located within a region that affords them premium access and site metrics,” said RCP’s Grelier who is striving to make the old mall property economically viable again. “When this is the case, there is typically strong demand for several multiple property types such as hospitality, residential, office, restaurants, and retail.

However, Grelier said when they purchased the old mall property in 2015, they had a strategy ready for MidCity. 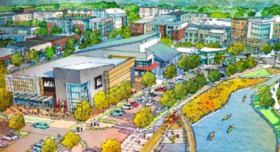 “We began working with the city and Urban Design Associates (UDA) to create a mixed-use project that would meet market demand and help reverse the decline of the West Huntsville commercial corridor,” he said. “We also had a broader, more aspirational strategy in collaboration with the city to use the MidCity District as regional economic growth tool by addressing the ‘next-generation’ workforce demand in Cummings Research Park.”

Grelier said they engaged nationally known market research consultants to perform third-party market studies to guide them in developing programming for a proper balance of uses.

“We used the information from the studies to collaborate with the City and UDA to produce a complete district business plan that would maximize regional draw by creating diverse layers of use and programming at the property,” Grelier said.

“Much of the emphasis is on highlighting our local cultural assets and identifying destination venues like TopGolf, public parks, and an amphitheater to establish a foundation around art and culture.”

He said this is now happening through connections with Huntsville’s and Muscle Shoals’ regional music legacy to bring a world-class 8,500-capacity amphitheater to the development.

“We believe the amphitheatre will be very successful and play a vital role in the elevation of the region as a place you want to live,” Grelier said. “There’s a strong demand for weekend entertainment so the music initiative happening in North Alabama will not only keep locals from traveling to spend in nearby markets, it will attract more weekend tourism to our region.”

Sealy said there is a strategy involved in where they build these mixed-use developments as well.

“These developments are really a long-term strategy in the sense that consumer preferences are shifting this way, so we are building for what is more popular now and appears will be more popular in the future,” he said. “… We are trying to draw certain people and jobs from other cities.  These developments are a recruiting tool and regional draw when we are competing against bigger cities for the same talent.

“Some people, particularly millennials, desire this type of environment for living or work, so we need them to attract that population …. They will spread through the regional area, but they need a certain density of people to work, so they will be concentrated in the growth corridors where the population and jobs are the largest.”

And, now, there is something for just about everyone.

“You hear people say, ‘Huntsville has some pretty cool breweries downtown, I can have some fun on Friday night, go see a baseball game, spend the night, go shop at Bridge Street, play some TopGolf, and get brunch at Stovehouse on Sunday’,” said Ceci. “It makes us a lot like Chattanooga – a kind of weekend destination where people say, ‘Wow! Huntsville is a great place to go for the weekend. There is always something to do.’”

“I enjoy working on mixed-use projects because there is a huge emphasis on architecture, walk-ability, streetscape,” said Sealy. “The multi-use developments are a bigger challenge, but it is a rewarding creative process.”

Battle said the revitalization of one area pays benefits to the entire city.

“The Live, Work, Play strategy has always been our city plan,” said Battle. “Revitalize one area using the profits of another area we have revitalized and watch the spread of that revitalization until eventually the whole city is revitalized from one end to the other in every direction.”