It is a strategic move resulting from the COVID-19 pandemic. 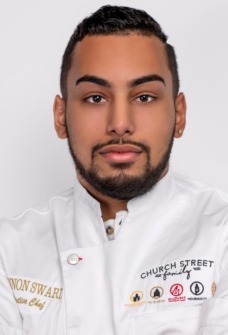 Huntsville restaurateurs Matthew and Stephanie Mell of the Church Street Family Group worked with New York-based celebrity chef Jimmy Canora to conduct a nationwide search for a new executive chef who can help them navigate through unprecedented times for the food and beverage industries.

Officially stepping into the position this week, Executive Chef Kannon Swaris has moved to Huntsville from Miami where he was most recently the Executive Sous Chef at Nobu Miami. He opened Nobu as a junior sous chef, working under Nobu Chef Thomas Buckley.

He was senior sous chef of Terra Mare at the Conrad Hotel and opened Isabelle’s, an Italian-American restaurant at the Ritz Carlton.

Swaris will oversee all culinary aspects of Church Street Family’s six Huntsville restaurants, supervise menu and restaurant development and direct the hiring and training of the culinary staff at all six venues.

The Church Street Family owns the Church Street Wine Shoppe, Purveyor at the Avenue Huntsville, Mazzara’s Italian Kitchen and Pourhouse at Stovehouse. They are also planning to open two venues: Catacomb435 in September and The Corner Pour in October.

According to the Mells, the challenges of the pandemic on the restaurant and entertainment industries require teamwork and exceptional leadership in order to not only move their company forward, but to raise the hospitality bar and increase tourism and travel to Huntsville during these challenging times.

“We are extremely excited to introduce Chef Kannon,” said Stephanie Mell. “One of his first undertakings is the redevelopment of menus at all locations where he will infuse his own style and talents into each dish. We feel honored to have him on our team.”

In the meantime, Canora will continue to work with the Mells to further develop the CSF brand. An award-winning cookbook author and corporate consulting chef at Delmonico’s Wall Street, Canora honed his skills at the Tribeca Grill in Manhattan, owned by actor Robert DeNiro. Canora’s latest cookbook Italian Family Traditions with a Twist is due out in October.

The Gun Sales of Madison County: A Booming Business