The employee contributors of the IronMountain Solutions Employee Peaks Fund recently awarded $45,860 to 15 local-non profit organizations. This brings the total to nearly $190,000 that IMS employees have given back to community organizations since the fund was founded in 2018.

“In a year like 2020, our non-profit and volunteer community needs us more than ever. We are all adapting to a new way of work and life,” said company President & CEO Hank Isenberg. “In a time that has brought so much change, it is humbling to see that the giving nature of IMS employees remains strong.”

The IMS Employee Peaks Fund is entirely run by employees, comprised of a Board of Directors and employee contributors who vote on the applicants that will receive grants each award season. More than 80 percent of the employees contribute through payroll deductions throughout the year.

“I am proud to serve as the chair and proud of the impact we are able to make,” said board Chair Sharon Valavicius. “I have no doubt the grant recipients will put this money to use in making our community even stronger in the year to come.”

The IMS Employee Peaks Fund awards grants to qualified applicants twice a year. Applications will be accepted in the spring. For information, visit www.ironmountainsolutions.com/community/. 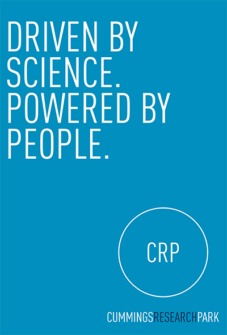 IBM, Lockheed Martin, Northrop-Grumman, and the University of Alabama-Huntsville quickly followed. Since then, Cummings Research Park’s 3,843 acres of prime Huntsville real estate has been a focal point of a 50-year master plan.

Cummings Research Park, with a 92 percent occupancy rate and 240 untouched acres to spare, is the second-largest research park in the nation and fourth largest in the world.

But to better understand the growth strategy at work in the park, it is best to differentiate between Research Park East and Research Park West.

“When we talk about current growth, we mean business growth from companies within the park, especially on the west side,” said Erin Koshut, the executive director of Cummings Research Park. “On the east side, market studies show we need to redevelop that area to create greater density and to replace 1960s and 1970s buildings with properties that align with today’s economy. That will infuse the older section with new vibrancy.

“By doing that, we won’t have to look at physical land expansion per se for a very long time.”

Within the master plan are five-year work plans. The city is currently working off a plan finalized in 2016; a new plan begins in 2021. The plan acknowledges that some of the original buildings and key properties in the oldest sections of Research Park East are no longer viable in the market.

“Without the revitalization, if a company wants to go in and invest in that part of the park, they wouldn’t get their return on investment,” said Koshut. “That is why the zoning ordinances were changed for Research Park East – to give back some of the land to the park and to reduce economic setbacks.” 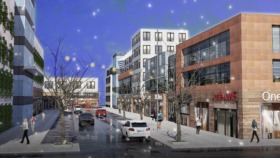 One such property is at Bradford and Wynn drives on the former site of the St. John Paul II Catholic High School. Driven Capital Partners in California purchased the four-acre site and plans to redevelop it into a mixed-use site called Bradford Crossing.

“Article 55 of the new zoning ordinance is very specific and says if you have a retail element on the ground floor, there has to be two or more uses,” said Koshut. “We cannot build a standalone gas station or drop a superstore in there, but a multistory building with ground floor retail will create density on a small but efficient parcel of land.

“No decision has been made on what other uses will be included, but it could be office space, multi-family residences, a hotel, or a mixture of all three on upper floors.”

“This is not just the (Huntsville-Madison County) Chamber or the city calling for these changes,” said Koshut. “We have landowners like the Olin King family at Crown Leasing who own property on Bradford Drive. They demolished the building that was on it and now have the land for sale. Business and landowners understand the flavor of changes happening in the older section of the park.”

Other planned redevelopments include converting Executive Plaza off Sparkman Drive into a multi-use facility, including an arena for the UAH hockey team and convocations; and Huntsville’s plans to donate up to $1.8 million in land to Alabama’s third magnet school, the Alabama School of Cyber Technology and Engineering. It has a temporary home at the Tom Bevill Center on UAH’s campus, but plans are to build a permanent location in Cummings Research Park East by 2022.

“This will give the whole park along the outskirts of UAH, a big infusion of vibrancy and marketability,” said Koshut. 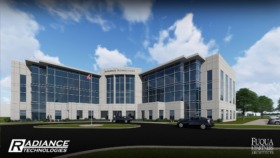 The new Radiance Technologies facility will consolidate operations and employees. 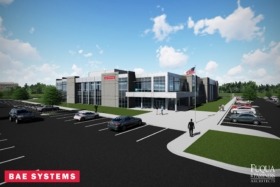 The $45.5 million, 83,000-square-foot BAE Systems building is scheduled to open next year.

“BAE Systems has a long history with Huntsville dating back many years when they had only a couple of employees,” said Koshut. “We are proud to see them bringing in 200 employees, many new hires, and some recruited to Huntsville from the Northeast.”

Fifty-four-foot walls are up around the $200 million Blue Origin rocket engine production facility on Explorer Drive. Expected to open its doors in March 2020, Blue Origin is estimated to bring up to 300 jobs to the local economy.

“We have the first apartments, Watermark at Bridge Street Town Centre, built in Research Park,” said Koshut. “They consist of two four-story buildings and 240 apartments. Over half already leased before they open and of course a majority of those people work in Research Park.”

She said they would like to see an extension of Bridge Street Town Centre or at least retail that is congruent to Bridge Street grow into the commercial retail corridor between Bridge Street’s outdoor shopping promenade and Lake 4.

It’s All for the Employees 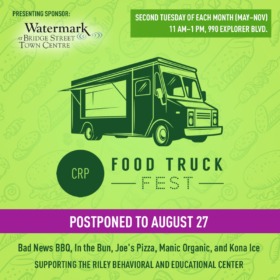 “There is a key component of all this expansion and redevelopment,” said Koshut. “It is driven by the wants and needs of employees.

“These companies want to recruit top talent to Huntsville, and they want to retain them. They require conveniences, activities, and amenities that have been available to them in cities where they are recruited from, many bigger than Huntsville.”

This includes access luxury apartments and single-family homes in or surrounding the park; creating a sense of vibrancy and community with activities such as the Food Truck Fest that draws some 300 people a month; free monthly happy hours in the park; and free Suzy’s Pops or Steel City Pops during the summer.

“As the city continues to invest in that program, we hope to connect many bike-share systems across the city so, at any time, an employee can hop on a bike and ride out to lunch,” said Koshut. “Young people enjoy being outside and easily get tired of being stuck in an office all day. Huntsville companies are recruiting people from cities that offer a quality lifestyle amenity.”

In its new location on Voyager Way in Cummings Research Park, IronMountain Solutions has a lot to celebrate.

For the fourth consecutive year, IronMountain Solutions has been named as a contender for the Huntsville-Madison County Chamber of Commerce’s Best Places to Work award. Businesses that create an excellent workplace culture through employee engagement, strong leadership, and excellent communication are not only measured through anonymous employee surveys, but also publicly recognized by the Chamber.

It’s no secret that IronMountain Solutions is a great place to work. As a rapidly growing enterprise that specializes in an impressive array of defense industry-based systems, security, solutions, and support, IronMountain Solutions fosters a dynamic, collaborative work culture with a highly focused vision of continuous growth. Because of this, the company was literally busting at the seams.

After spending the last decade as a tenant in a smaller facility, operations are now all under one roof, along with capacity for future growth, at its new facility on the corner of Old Madison Pike and Voyager Drive.

“It’s a big deal,” said Corporate Communications Manager Tiffany Morris. “In our previous location, we were spread across two different suites. We would have to trek across the campus, which made for a nice walk on a pretty day, but not so nice in bad weather.

“Our new facility is updated, new, and bright. And it’s great being all together, we can walk over to someone’s office and talk face-to-face.”

Shannon Drake, the company’s corporate community relations coordinator, said she welcomes the change of scenery – inside and out.

“We can do more with interior design and office configuration,” she said. “We’ve gained five conference rooms. Two of them are large training rooms that can accommodate 50 to 60 people. We also have state-of-the-art technology and secured access.

“The added conference rooms allow for in-house trainings and ‘all-hands’ meetings, without having to rent off-site meeting space. It’s also really exciting to be part of Cummings Research Park.”

“The same mindset that has kept us growing for the last 12 years will help us continue to be successful for years to come and that’s operating with extreme customer focus,” said company President/CEO Hank Isenberg. We strive to hire technically and tactically proficient employees, build sincere relations, and find ways to constantly improve our work atmosphere.

“As long as we keep doing what’s right for our customers and employees, I see only more great things for Iron Mountain Solutions for many years to come.”

The annual Inc. 5000 list was unveiled and it included 25 Madison County small businesses.

“If your company is on the Inc. 5000, it’s unparalleled recognition of your years of hard work and sacrifice,” said James Ledbetter, the magazine’s editor in chief. “The lines of business may come and go, or come and stay.

“What doesn’t change is the way entrepreneurs create and accelerate the forces that shape our lives.”

Reflective of Huntsville’s “Federal City” moniker, 21 of the 25 businesses are in government services.

The complete list can be found at http://www.inc.com/inc5000/list/2018 and in the September issue of Inc. magazine, which is on newsstands now.