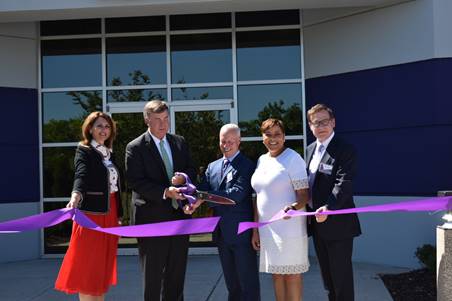 After supporting the Missile Defense Agency in Huntsville for more than 15 years, Leidos spent $3 million to retrofit its first physical systems and support center in Huntsville. 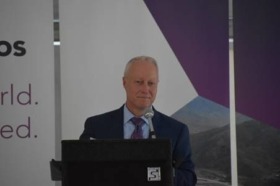 “This new facility signifies our continued growth in Huntsville, but it also supports our customers in helping them solve problems from a city and a region known for its innovation,” said Fasano. “We help our customers in the defense industry achieve effective, sustained military advantage … from support for C4 (command, control, communications, and computers/cyber) to cyberspace.

“We are doing that from right here in Huntsville. Let’s keep it local.”

In 2016, Lockheed Services Group took $5 billion and merged it with another $5 billion from Leidos to create a $10 billion organization carrying the Leidos name. The move gave Leidos a much bigger footprint in each of the company’s four major areas of expertise: defense, civil, health and intelligence.

Three of those four groups have roots in Huntsville.

The Leidos team has been part of the Patriot and THAAD missile programs and supports MDA requirements and critical services to the warfighter. The new location features automated test equipment that helps provide those systems to Leidos customers at home and abroad.

“Leidos’ civil division has been contracted to NASA here in Huntsville for several years, providing logistics for all the different materials made for the International Space Station,” said Barry McDaniel, vice president of Maritime for Leidos, overseeing support for all branches of the military including the Army.

“Intelligence is also coming to Huntsville soon because the FBI is here; but our missile defense teams have been scattered. This building is an opportunity to consolidate everything related to the Department of Defense Missile Defense Agency counter unmanned air systems. That includes supporting customers all over the world including the United Arab Emirates, Saudi Arabia, Israel, and all of Europe.”

Military delegations from Germany and the Netherlands were in attendance.

“It’s not just about what is happening in this building, but we have five other locations and we are about to put more customers in Huntsville,” said Fasano. “That includes technical field support for U.S. Army RQ-7 Shadow unmanned aircraft systems right here at Redstone Arsenal; end-user IT services for ten NASA centers; and end-user IT services for 37,000 Army Corps of Engineers from our corridors right here in Huntsville.”

The RQ-7 Shadow is the Army’s unmanned aerial vehicle, also used by the Australian and Swedish armies for reconnaissance, surveillance, target acquisition, and battle damage assessment.

Fasano also announced the arrival of Leidos Live – the company’s Innovation Virtual Experience coming to Huntsville in November. Leidos Live is an immersive technology lab and showcase on wheels where visitors will find some of Leidos’ top innovations brought to life. Fasano said it is a must-see.

Leidos, the name comes from the word kaleidoscope – the centerpiece of the instrument from which complex problems are seen from every different angle, is an IT and engineering services company. Leidos employs 235 people in Huntsville out of 34,000 in every state and more than 30 countries.

“To the Leidos team, we are so delighted to see the growth and the expansion and all the things that have happened here that make our economy move forward,” said Huntsville Mayor Tommy Battle. “Five years ago, we started with a very small Leidos group. Today you are threefold, and it’s a story told about Huntsville time and time again – companies throughout Research Park and throughout this city who are growing organically, growing where they are, getting bigger and bigger. Leidos has grown so much they needed a new building.

“We are so glad to be able to help them build it.”