The pandemic has altered the way people go about their daily lives and special events.

The United Way of Madison County‘s annual “Jumpstart Read for the Record” is no different.

In past years, volunteers would visit classrooms around the area and read the same book on the same day.

This year, they will still read the same book on Thursday, but – with the aid of Facebook and Zoom – it will be a virtual reading.

“The key focus,” said the agency’s Community Impact Director Cathy Miller, “will be to reach every child in public school ages 3-8 years.  To do so, we’ve enlisted the help of superintendents in Huntsville City, Madison City and Madison County systems. They will be encouraging every PreK-2nd grade class in their school to be open to receiving a free copy of the book, ‘Evelyn Del Ray is Moving Away’ from United Way so teachers can read for the record on Oct. 29 with their class.

Miller said the volunteer readers are posting messages on social media to let the community know how this year’s event will work.

Key support from the Junior League of Huntsville, Hexagon and a team of 10 volunteers is bringing the event to life.  The story is also read at the Huntsville/Madison County Library in its preschool story times.

“During such unprecedented times when our community needs our nonprofit community and its services more than ever, events such as Jumpstart can put our arms around our teachers and our community,” said Clay Vandiver, President and CEO of United Way. “It can draw attention to vital issues and the role of United Way in bringing vital resources and supporting key nonprofits.

“This one-day event is an extension of our year-round work.”

Huntsville Utilities has chosen Hexagon’s geographic information system to consolidate the utility’s GIS solutions into one. The new GIS will serve as the foundation for building and managing Huntsville Utilities’ electric, gas, water and fiber infrastructure.

Huntsville Utilities has partnered with Hexagon for three decades to provide utility services to Huntsville and Madison County. With Hexagon’s GIS solutions providing a single source of location-based information, Huntsville Utilities will have real-time data for the operations, engineering and accounting teams to help provide service to the more than 330,000 customers.

“Where we go and what we do in the next 20 years is based on foundational decisions such as our GIS core,” said Wes Kelley, CEO of Huntsville Utilities. “With Hexagon’s solution, we have a single source of information for our physical assets, a trusted platform upon which we will build all our solutions.”

Applications of the new GIS system include outage management workflows, preventive maintenance strategies and more. Users of the new system will be able to design and maintain information about the utility’s assets via the web and mobile devices, which extend the solution into the field to make critical decisions.

“We’re honored Huntsville Utilities selected Hexagon’s GIS solutions,” said Steven Cost, president of Hexagon’s Safety & Infrastructure Division. “We are proud to be part of Huntsville Utilities’ path forward, not only as a technology provider, but also as a partner in the development of our local community.”

The Beatles played their last public concert on the roof of Apple Records and 350,000 young people gathered at Woodstock to protest the Vietnam War.

Bob Thurber: “Our work in hardware and software wasn’t an industry then – it was just the beginning of stuff.” (Photo/Steve Babin)

But while Boeing was debuting its 747 “Jumbo Jet” to the American public, NASA engineers had landed Neil Armstrong and Buzz Aldrin on the surface of the Moon using the Apollo Guidance Computer. It’s laboriously handmade, read-only rope memory was equivalent to 72 KB of storage today.

Also in 1969, while millions of children watched the Utopian lifestyle of a space age cartoon called “The Jetsons” with its clunky robots and home automated conveyor belt, engineers were making it a reality, linking for the first time, several large-scale, general purpose computers into a network known as the Advanced Research Projects Agency Network (ARPANET).

It was against this backdrop that IBM engineer James Meadlock, his wife Nancy, and three young engineers Bob Thurber, Terry Schansman and Keith Schonrock left their jobs at IBM on Feb. 10, 1969 to start M&S Computing on South Memorial Parkway in Huntsville.

With the company that became known worldwide as Intergraph and now known as Hexagon, the now-retired Meadlock and his remaining team returned to the sprawling campus and world headquarters in what is now the new Town Madison, for a 50th anniversary celebration.

Hundreds of current and former employees and their families filled the three-level hexagon-shaped building with its towering glass windows and tiered mezzanine overlooking a private lake to hear Meadlock speak.

According to Bob Thurber, co-founder and the original executive vice president of the company, IBM got the contract for the instrument unit on the Saturn launch vehicle because they had built the first digital computer on a missile.

“I came out of college with IBM in Huntsville, so when we finished with the Saturn program, we were the renowned experts on putting digital computers onboard missiles,” said Thurber. “We were able to leave IBM with our heads held high.”

Initially, Thurber said all the Army’s weapons systems needed computers on them, so M&S Computing became a consultant for them.

“One of the things we did in the IBM days was build an interactive graphics interface for the simulation of the Saturn launch vehicle,” he said. “You had to run simulations over and over and over again, but if something went wrong within the first 30 seconds of launch, you didn’t know it until you came in the next day. They needed a quicker interactive system to do it.

“That’s how we got started. By running simulations interactively, you could watch the trajectory on the screen and if it blew up or went off-course, you could just stop it, key in some different parameters, and run it again. You could do in a day what had been taking a month.”

That ability to visualize data led to their graphics mapping capabilities, and M&S Computing was the first company to do that as well.

“Our work in hardware and software wasn’t an industry then – it was just the beginning of stuff,” Thurber said. “There were only four companies in the business when we got into it, but we essentially created the core graphics for AutoCAD.”

Thurber said they sold their first three systems around Christmas 1973: an engineering drafting system for 2D drafting to a company in Houston; a system for municipal mapping to the city of Nashville; and a system to the Army Missile Command (AMC). All three were totally separate industries, but they all needed the same basic graphic capabilities.

“We lost a lot of money when we sold Nashville the mapping system,” Thurber said. “The city said to us, ‘Look, we would love to use this stuff, but we don’t want to build all these maps!’ We said, ‘Okay. We’ll do it for you’.

“We charged them $80 per map. The cost was $500 per map, but it really it forced us to make it a good mapping system and it gave us the experience we wouldn’t have gotten had we held their hand while they did it.”

In the end, Nashville was the first city to map its roadways to understand traffic flow, congestion points, etc. all thanks to M&S Computing’s mapping capabilities. 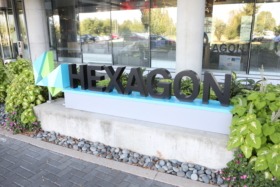 The company then known as M&S Computing rented office space in Huntsville until the 1974 tornado destroyed the Bendix Building on Alabama 20 in Madison. Using insurance money, they were able to reconfigure it to M&S Computing’s requirements.

“The only eating place near our office back then was a Waffle House,” Thurber said with a laugh.

That would be the first of a sprawling campus with more than 4,000 employees, that is today located amidst the bustling new Town Madison development.

In 1981, M&S Computing went public and changed its name to Intergraph. After Meadlock and Thurber retired from the company, Stockholm-based Hexagon purchased Intergraph in 2010 for $2.125 billion.

Meadlock, who lost his beloved wife and business partner Nancy, is quietly retired.

Thurber is active with Huntsville’s tech incubator BizTech, but he says for a company that was the first to develop intelligent applications on top of graphics, the software and computing industry has now moved way past him.

“I still come over and visit and when I see the demos of the work Hexagon is doing now, fifty years later, the capabilities are so much more than graphics,” he said. “But they tell me that our software, M&S Computing’s software, is so integrated into their design and construction process, it cannot be unseated.”