Protecting sensitive government activities and operations is one of the biggest national security challenges facing our country.

The Missile Defense Agency in Huntsville got a big boost of momentum with System High’s acquisition of Booz Allen Hamilton’s Technical, Engineering, Advisory, and Management Support (TEAMS) contract with its 110 employees here.

“The close of this transaction increases our momentum in helping customers solve their most challenging protection problems,” said Rob Howe, System High’s president and CEO. “We welcome these new employees and look forward to combining forces to better protect current and emerging MDA capabilities.

“This is just one of the initiatives being executed to expand our impact to preserve national security, and MDA success is critical for sustaining this objective. We are excited to grow our presence in the Huntsville area, and look forward to serving the community and establishing strong lines of communication and collaboration with the MDA stakeholders so that we can consistently meet and exceed their expectations.”

Booz Allen has supported the DoD for decades helping to accelerate innovation and create transformative solutions to help defend the nation.

Lincoln Hudson, senior vice president and leader of Booz Allen’s Huntsville office, has been instrumental in securing the deal with System High.

“System High is a strong organization for ensuring the continued protection of the essential systems, technologies, and capabilities that enable success of the MDA mission, which is to defend the United States and its allies from hypersonic and ballistic missile attacks,” said Hudson. “We remain fully committed to MDA’s mission and to Huntsville, where we will continue to hire and develop talent, invest in cutting-edge innovation, and deliver high-end technology services.

“We are confident this realignment of the TEAMS business will ensure uninterrupted support for this critical work and are so pleased these jobs will remain part of Huntsville’s thriving technology community as well as others across the country.”

The financial terms of the acquisition were not disclosed.

GMD is the only defense program capable of protecting the entire U.S. homeland, including Alaska and Hawaii, against long-range ballistic missile attacks.

Boeing manages the program in Huntsville and the work will be performed in Chandler, Ariz.

It was a simple question from a Nevada congressman to the director of the Missile Defense Agency: 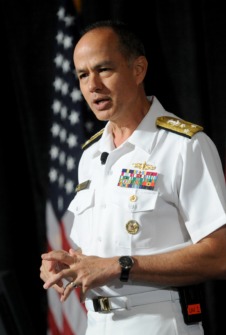 “I gave that answer because I have the utmost confidence in those soldiers sitting at the console,” MDA Director Vice Adm. Jon Hill said Thursday at the 22nd Space & Missile Defense Symposium.

Hill spoke before a packed and attentive Von Braun Center ballroom audience on the final day of the annual event. It was a record-setting event with more than 3,500 people attending the three-day symposium which had nearly 200 exhibits and some 1,400 private exhibitors and 605 government exhibitors.

The director said the a modern-day threats are much more complex than in the past and the United States must be ready for the ever-changing, constant challenges.

“For me, it always starts with the threat,” Hill said. “What’s really changed has been the advancement of the threats.

While the threats are constant and complex, Hill said he has spoken with Army Lt. Gen. Jim Dickinson, commanding general of the Army Space and Missile Defense Command; and Gen. Terrence O’Shaughnessy, commander of the U.S. Northern Command and North American Aerospace Defense Command (NORAD), about developing means to overcome the threats without overburdening the personnel.

“The more complex things become, that you put before the eyes of the soldiers and sailors, it’s harder for them to execute,” he said.

In effect, keeping things simple instead of causing the personnel to spend time learning and relearning, forcing them to divert their attention from the mission.

Hill also touched on our international relationships as key to our security.

With NATO and the U.S. having installations around the world, it provides the United States with something Russia, China, Iran and North Korea don’t have – “partnerships,” he said.

“It’s what our adversaries do not have; they don’t have partnerships. That gives us an advantage.”

Overall, Hill said, the mission of the Missile Defense Agency is “a great mission.”

“I call it a noble mission,” he said. “It’s very motivating to defend our troops, our allies and friends.

“I feel great about where we are today.” 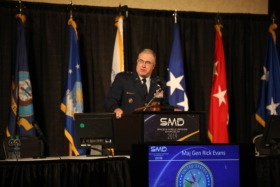