MADISON — Jay Bell knows something about big moments in a baseball playing and coaching career spanning more than two decades, none more so than when he scored the winning run in Game 7 of the 2001 World Series as the Arizona Diamondbacks rallied to defeat the New York Yankees. 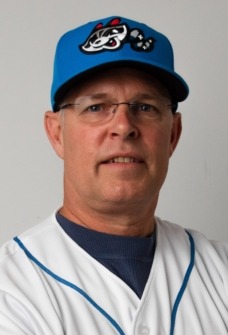 Over an 18-season Major League career, he won a Gold Glove, Silver Slugger and was twice an All-Star.

In three seasons as a manager in the Yankees minor league system, his teams made the playoffs each season including in 2019 when the Triple-A Scranton/Wilkes Barre RailRiders won the International League Northern Division.

He’s seen the other side of the sport as well.

He was at shortstop for Pittsburgh when Francisco Cabrera rolled a grounder just past a diving Bell to score Sid Bream from second base to lift Atlanta past the Pirates in a Game 7 win that clinched the National League pennant in a moment that lives in Braves’ lore.

Now comes his newest challenge: leading the Rocket City Trash Pandas into their first season as a member of the Los Angeles Angels’ Double-A affiliate in the Southern League.

“It is a thrill to be part of this inaugural season,’’ Bell said during an introductory press conference at Toyota Field, which is expected to open for the team’s first homestand beginning April 15 against the Mississipi Braves.

“To grow up in Pensacola, to have the opportunity to come to the Southern League and be a part of a brand new franchise, a state-of-the-art field, to be associated with Rocket City — Madison and the Greater Huntsville area — is tremendous.’’

Growing up in the Florida Panhandle, Bell said being back in the South and Alabama “feels like home.’’

He drove around the area in a rental car prior to the press conference and came away “really impressed with what is going on in this city. To be part of baseball coming back to this area is something special.’’

Bell is reuniting with Trash Pandas President and CEO Ralph Nelson. Nelson was working in the front office of the Arizona Diamondbacks when the club launched in 1998. Bell was a member of the team’s original roster.

“When I was a young baseball executive I worked for a guy named Al Rosen,’’ Nelson said. “He told me a little trick, which was to go down to the clubhouse and see who were the first players that showed up. He said ‘Ralph, those will be your managers.’

“In San Francisco, those guys were Dusty Baker, Doug Melvyn and Matt Williams. I went to Arizona and the first guys in every night were Craig Counsell, Matt Williams and Jay Bell. I knew Jay Bell would be a manager. I just didn’t know how fortunate we’d be to have him as ours.’’

Josh Caray, the Trash Pandas radio voice, echoed a theme the club has repeated since arriving.

“We are Double-A in name but a major league operation,’’ he said. “One of the things the Los Angeles Angels have done for us is they have provided us with a big-league manager.’’

Bell and wife Laura have a daughter, two sons and two grandchildren. Sons Brantley and Brock play professionally for the Reds and Red Sox, respectively.

The Trash Pandas open the season April 9 with a five-game series at the Birmingham Barons and make their Toyota Field debut April 15 against the Mississippi Braves.