Upon completion in 2021, the plant will add 450 jobs and represent a $1.2 billion investment that solidifies the Huntsville facility as the automaker’s largest engine producer in North America.

Milestones include the start of production for the all-new, redesigned 4-cylinder engine, and the closing in of the plant’s 150,000 square-foot V6 engine assembly line.

Toyota Alabama supplies engines for one-third of all Toyota vehicles assembled in the U.S. The latest expansion is the plant’s fifth since it began engine production in 2003; annual engine capacity will increase 34 percent to 900,000 and total employment will top 1,800.

This investment is part of a broader commitment from Toyota to invest $13 billion in its U.S. operations over a five-year period through 2021. To date, Toyota has committed nearly $9 billion of the announced total; cumulative direct investment in the U.S. exceeds $28.4 billion

Toyota is putting its products on the assembly line for education. 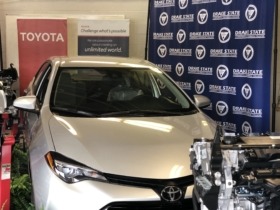 The automaker is donating two Corollas and 12 engines to support the advanced manufacturing program at Drake State Community & Technical College in Huntsville.

“We believe it’s our responsibility to partner with educators to support career readiness programs that help develop our future workforce,” said Kim Ogle, Toyota Alabama corporate communications. “By donating these vehicles and engines, we are helping ensure students are trained on up-to-date equipment and receiving the highly technical skills needed for the thousands of manufacturing jobs in our area.”

The donated Corollas and engines – valued at approximately $200,000 – were originally used to provide onsite training for team members at the Huntsville Toyota engine plant. 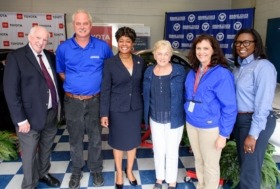 Now, these products will serve a new training purpose as it supports hands-on learning at Drake State.

“This investment in the development of our workforce by Toyota is a great of example of how we – business and education – should and must work together to ensure that when potential employees arrive at the doorsteps of industry, they are ready to work,” said Patricia Sims, President of JF Drake State.

“We encourage other companies to directly engage with local schools and community colleges to help strengthen overall workforce readiness efforts.”