NASA has taken the next steps toward building Space Launch System (SLS) rocket core stages to support as many as 10 Artemis missions, including the mission that will carry the first woman and next man to the Moon by 2024.

The agency intends to work with Boeing, the current lead contractor for the core stages of the rockets that will fly on the first two Artemis missions, for the production of SLS rockets through the next decade. The core stage is the center part of the rocket that contains the two giant liquid fuel tanks. 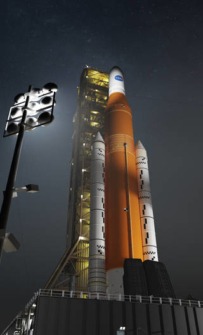 Illustration shows NASA’s Space Launch System (SLS) in the Block 1 configuration, which will carry an Orion spacecraft beyond the Moon, on the mobile launcher. SLS is the only rocket that can send the Orion spacecraft, astronauts and supplies to the Moon on a single mission.

Towering 212 feet with a diameter of 27.6 feet, it will store cryogenic liquid hydrogen and liquid oxygen and all the systems that will feed the stage’s four RS-25 engines. It also houses the flight computers and much of the avionics needed to control the rocket’s flight.

The Space Launch System is the backbone of NASA’s deep space human exploration and is the only rocket capable of sending crew, the Orion capsule and heavy cargo to the Moon on a single mission.

“It is urgent that we meet the president’s goal to land astronauts on the Moon by 2024, and SLS is the only rocket that can help us meet that challenge,” said NASA Administrator Jim Bridenstine. “These initial steps allow NASA to start building the core stage that will launch the next astronauts to set foot on the lunar surface and build the powerful exploration upper stage that will expand the possibilities for Artemis missions by sending hardware and cargo along with humans or even heavier cargo needed to explore the Moon or Mars.”

NASA works with Boeing, the current lead contractor for the core stages of the rockets that will fly on the first two Artemis missions. Boeing is completing the first SLS core stage with the second well underway. The order leverages labor, materials, and supply chain efficiencies for production savings.

The SLS is managed at the Marshal Space Flight Center in Huntsville, manufactured at the Michoud Assembly Facility outside of New Orleans and will launch from Cape Canaveral.

NASA has provided initial funding and authorization to Boeing to begin work toward the production of the third core stage and to order targeted long-lead materials and cost-efficient bulk purchases to support future builds of core stages.

“We greatly appreciate the confidence NASA has placed in Boeing to deliver this deep space rocket and their endorsement of our team’s approach to meeting this unprecedented technological and manufacturing challenge in support of NASA’s Artemis program,” said Jim Chilton, senior vice president of Boeing’s Space and Launch division. “Together with a nationwide network of engaged and innovative suppliers we will deliver the first core stage to NASA this year for Artemis I.

“This team is already implementing lessons learned and innovative practices from the first build to produce a second core stage more efficiently than the first.  We are is committed to continuous improvement as they execute on this new contract.”

The contract allows Boeing to order materials that will be used to produce additional SLS rockets through the next decade: 10 SLS core stages and eight Exploration Upper Stages to support Artemis III through Artemis XII. The full contract is expected to support up to 10 core stages and up to eight Exploration Upper Stages (EUS).

“NASA is committed to establishing a sustainable presence at the Moon, and this action enables NASA to continue Space Launch System core stage production in support of that effort to help bring back new knowledge and prepare for sending astronauts to Mars,” said John Honeycutt, SLS Program Manager at Marshall. “SLS is the only rocket powerful enough to send Orion, astronauts and supplies to the Moon on a single mission, and no other rocket in production today can send as much cargo to deep space as the Space Launch System rocket.

For the first three Artemis missions, the SLS rocket uses an interim cryogenic propulsion stage to send the Orion spacecraft to the Moon. The SLS rocket is designed to meet a variety of mission needs by evolving to carry greater mass and volume with a more powerful EUS.

The EUS is an important part of Artemis infrastructure needed to send astronauts and large cargo together, or larger cargo-only shipments, to the Moon, Mars and deep space. NASA aims to use the first EUS on the Artemis IV mission, and additional core stages and upper stages will support either crewed Artemis missions, science missions or cargo missions.

The unarmed ICBM was launched from Vandenberg Air Force Base, Calif., by an Air Force launch crew at Malmstrom AFB, Mont. The ICBM’s re-entry vehicle traveled approximately 4,200 miles to the Kwajalein Atoll in the Marshall Islands.

“The flight test program demonstrates one part of the operational capability of the ICBM weapon system,” said Col. Omar Colbert, 576th Flight Test Squadron commander. “The Minuteman III is nearly 50 years old, and continued test launches are essential in ensuring its reliability until the mid-2030s when the Ground Base Strategic Deterrent is fully in place.

“Most importantly, this visible message of national security serves to assure our partners and dissuade potential aggressors.”

Some development and assembly work will be performed here at Boeing’s Electronics Center of Excellence, which recently underwent a 28,000 square-foot expansion. The upgrade will provide remote, over-the-air rekey and code change capability for the missile system.

The contract will provide the government with the components needed to support the deployment of the ICU II hardware through 2022 — sustaining the Huntsville-based Minuteman III ICBM weapon system until 2036.

Boeing has supported every Minuteman flight test in the last 58 years. Boeing built the nation’s Minuteman missile for theAir Force in the early 1960s and continues to sustain the program to keep it safe, secure and reliable.

The Minuteman III is as fast as a seismic wave, traveling up to four miles per second and up to 15,000 mph.

The test demonstrates that the United States’ nuclear deterrent is robust, flexible, ready and appropriately tailored to deter twenty-first century threats and reassure our allies, the Air Force said in a release.  Test launches are not a response or reaction to world events or regional tensions.

One of the nation’s top construction/engineering companies has expanded its operations in the Rocket City.

This expanded presence in Huntsville will increase operational efficiencies and improve Bechtel’s collaboration with aerospace and defense industry partners, the company said.

“Today, we reflect on Bechtel’s rich history in Huntsville,” said Mike Costas, Bechtel’s Defense and Space general manager. “Today, our team looks to the future with aspirations of being an integral part of this community, providing unmatched expertise to our customers, while helping them deliver on their mission objectives.”

“We are excited to celebrate Bechtel’s growth in our community,” said Erin Koshut, executive director of Cummings Research Park. “Huntsville/Madison County has a ripe environment for their company to be successful – we offer a smart workforce and a beautiful, affordable place for their employees to live and raise their families.

“We look forward to our continued partnership as Bechtel moves into CRP.”

Bechtel’s history of service to the aerospace and defense industries in Huntsville goes back decades. Most recently, Bechtel-led Kwajalein Range Services, which includes Leidos, managed and operated the Ronald Reagan Ballistic Missile Defense Test Site on Kwajalein Atoll in the Marshall Islands from 2002 through 2018. KRS performed engineering and business services at two Huntsville locations. 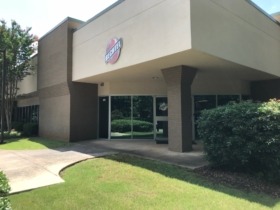 From the 1990s until 2012, Bechtel employed more than 100 professionals in Madison County as the engineering, procurement, and construction contractor for the Missile Defense Agency’s Ground-based Midcourse Defense program, which is designed to protect the United States from attack by long-range intercontinental ballistic missiles.

Additionally, the Huntsville team also has completed a number of nuclear power plants in the area, including Browns Ferry and Watts Bar, which supply electricity for more than 1 million households in the Tennessee Valley.

“Our employees are excited to once again be a part of the United States’ mission to maintain a secure national deterrent, while advancing our aeronautics and space exploration for the next generation,” said Project Engineering Manager Nathan McAdams. “The Huntsville team will work to deliver as promised to our customers and to the City of Huntsville.”

Currently, the Bechtel Huntsville team is supporting Boeing with various engineering, procurement, and construction needs. Bechtel plans to continue expanding its presence in the Huntsville area.