MADISON — There is a lot of plowing and tilling of soil going on at Clift Farm this week, but they aren’t planting cotton. 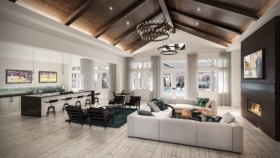 Instead, the Breland Companies announced that SWH Partners and Watercress Partners have planted the seeds of a luxury apartment community on the landmark development along U.S. 72 across from the Madison Hospital and Target Center.

The 273-unit Henry House at Clift Farm is perched on the banks of Knox Creek on the Balch Road gateway into the new Clift Farm development.

Named after the 19th century founder of the Clift family farm, John Henry Clift, it will feature stunning scenic views and miles of pedestrian trails that connect Clift Farm’s 470 acres of residential neighborhoods to its curated Main Street mix of retail and dining options.

With his blessing, the pedestrian-friendly residential community, park, and retail center is the latest upscale commercial and residential development for Breland, which is also developing Town Madison off Interstate 565 at Zierdt Road.

Financed by Bank of America, Henry House at Clift Farm is expected to be completed by spring 2021.

The complex will provide amenities such as granite countertops, stainless steel appliances, and a resort-style swimming pool.

“The strong job and population growth of the Huntsville market has played a large role in Watermark’s commitment to the second project in the Huntsville [area],” said Tyler Sauerteig, the company’s director of land acquisitions for the Southeast. “Watermark has had great success with the lease-up of Watermark at Bridge Street Town Centre, and we feel that Clift Farms is going to be a similar destination development with immediate area amenities and great proximity to jobs.”

The Breland Companies broke ground at Clift Farms across from the Target and Madison Hospital in May. Their goal is to create a community that will have a timeless feel while preserving the natural attributes of the historic family farmland.

MADISON — Soon … very soon, Town Madison will be a lighted beacon along I-565, a welcoming 530-acre gateway into the Rocket City for visitors from the east and west. 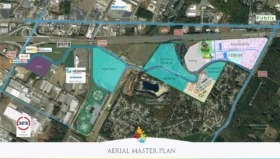 Town Madison is a sprawling multi-use development extending along I-565 from Wall Triana Highway to Zierdt Road. (Courtesy The Breland Companies)

The shear enormity of the sprawling mixed-use development is on full display amidst the “preponderance of red soil” that gave Redstone Arsenal its name.

Town Madison has already inspired a boom of construction and activity in downtown Madison. It is changing forever the skyline along I-565 between Wall Triana Highway and the intersection of Madison Boulevard at Zierdt Road.

The new stadium with its red roof is now clearly visible amidst the towering LED stadium floodlights and churned red dirt and rocks. Fans of the Rocket City Trash Pandas, the tenants of the new ballpark, are already decked out and geared up for the team’s first pitch at their new home stadium on April 15, 2020.

While the energy is moving toward a April 15, 2020 Opening Day, there is a lot more going on at Town Madison than just baseball!

Described as having a “Village of Providence feel”, the first phase of Town Madison’s residential community consists of 216 single-family homes and townhouses, currently under construction.

Townhouses are rising from the red dirt to the north of the baseball stadium. (Photo/Kimberly Ballard)

The Village of Providence was one of Huntsville’s first mixed-use communities built off U.S. 72 in 2003. It has been a shining example of how popular pedestrian-friendly neighborhoods and the amenity-filled lifestyle have become.

Single-family home lots are already selling out while a sales model of the townhouses graces the main drag a block from the stadium itself. Soon, potential buyers will be able to tour the layout and make preconstruction customizations to fit their lifestyle.

Currently the most visible residential component to rise from the red clay is The Station at Town Madison, a four-story, 274-unit luxury apartment complex, also within walking distance of restaurants, retail stores, the sports complex, and a slew of boutique hotels and destination resort hotels like Margaritaville that will be opening there.

“The Station is opening a leasing office within the next 45 days and will be moving new tenants in by the end of the year,” said Joey Ceci, president of the Breland Cos., which is developing the project. “I believe they already have plenty of interest and even some commitments from potential tenants who are interested in moving into such an exciting environment.”

Rendering shows the 170-room Hotel Margaritaville which will be just beyond the centerfield wall of the Rocket City Trash Pandas baseball stadium.

Ceci said hotels have always been an important component of Town Madison and progress on that front has been explosive. Convenient to Huntsville International Airport and I-565 and I-65, the new 97-room Home2Suites is open at 135 Graphics Drive, a block off Wall Triana at the westernmost edge of the development.

On the corner, a new Twice Daily convenience store and White Bison Coffee have also opened. Next to it, the 87-room avid Hotel is 50 percent complete, while a Hilton Garden Inn has broken ground a block up the street.

“The Town Madison target is 500 rooms,” said Ceci. “We will hit that number when the 170-room Margaritaville resort hotel breaks ground by the end of the year or very early next year.”

Announced back in 2018, the groundbreaking for Hotel Margaritaville has been delayed, putting into question whether Margaritaville with its tropical beach atmosphere, attached restaurant and lazy, winding river said to flow along the backside of the Trash Pandas centerfield wall, is still a go.

Ceci however is reassuring that Margaritaville will be in full swing by the Trash Pandas’ second season.

Other exciting venues such as Pro Players Park are committed to Town Madison, although construction has not yet begun.

The $12 million venue for travel softball and baseball will consist of 12 synthetic baseball/softball fields; a 65,000 square-foot sports facility with batting cages; a pro shop; a small café and vending area; and an indoor soccer field.

Pro Player Park will be situated west of the Trash Pandas’ stadium in what is known as the old Intergraph campus. No dates have been set for that groundbreaking, but it is expected to generate 300,000 visitors a year and, according to Madison Mayor Paul Finley, will yield about 40,000 room nights per year.

Finally, Ceci believes several restaurant concepts will be making announcements soon about their plans to open at Town Madison on the Zierdt Road side.

“Negotiations and discussions are happening every day with several restaurant and retail vendors and I believe we are very close to some solid commitments, but nothing I can announce today,” said Ceci.

Along with several national commercial tenants who are currently doing their due diligence, several announcements are expected in the coming weeks.

MADISON — In 1850, the population of rural Madison was less than 500 residents. Alabama farmers were producing nearly 565,000 bales of cotton and nearly 29 million bushels of corn a year.

John Henry Clift bought a small piece of rural farmland in what was then called Madison Station.

Since then, six generations of the Clift family have farmed that land for cotton, corn, soybeans, fresh fruits, and vegetables, mostly for local consumption.

It was Jack Clift, known as Pawpaw to his many children, grandchildren, and great-grandchildren, who moved home from Atlanta after World War II and took over the family farming business. Jack, who turned 100 years old in December, expanded the farm to more than 600 acres off U.S. 72 between Wall Triana Highway and Balch Road in Madison.

Several years ago, he sold off a sliver to developers who built the shopping plaza where Planet Fitness sits today.

Last fall, Jack officially sold the remaining 550 acres to The Breland Companies who, with his blessing, will develop it into a pedestrian-friendly residential community, park, and retail center.

The Breland development recently broke ground across the highway from the Target Shopping Center and Madison Hospital, but according to Joey Ceci, president of The Breland Companies, the development will in every way, honor and represent the Clift legacy.

“Jack has always been a conservationist at heart,” said Ceci. “His original vision for the land was to keep it agricultural, but he realized later in life that it was going to be sold. He wanted to be an active participant in the process and after much discussion with his family, he entrusted the development and preservation of his property to Louis Breland.”

The goal is to create a community that will have a timeless feel, that will preserve many of the existing natural attributes, while providing retail, dining, residential, office space, multifamily homes, and medical opportunities.

“There is a lot of retail in that area already, but this one is different from those you are seeing at MidCity Huntsville and Town Madison, which will draw a regional audience,” said Ceci. “This one will be mostly residential and will have a relatively small, town center retail and restaurant component that supports the Clift Farm community.”

He said it will have a very real element of green space: a passive park area planted with wildflowers and fruit trees as opposed to soccer fields; a man-made pond surrounded by greenways, and a lot of walking trails. The residential component will consist of townhomes starting at $300,000 and homes ranging from $400,000 to $600,000.

In March, the Madison County Commission approved $8 million for Breland to spend on the development, to build roads and a utility infrastructure for the project.

“We have already done a little bit of groundbreaking, but we are currently building arterial roads and putting in that infrastructure,” said Ceci. “Breland is building a third lane into the property from (U.S.) 72 to alleviate the already heavy traffic in that area, and we have brought in traffic engineers to help us install a couple of red lights.”

The front of the development along U.S. 72 will be retail and restaurants. The back will include three-story luxury apartments and townhomes with an overall pedestrian environment similar to Huntsville’s Village of Providence. Several out-parcels of land may be developed as medical office space, located conveniently across from Madison Hospital.

One of the most unique aspects of the project, according to Ceci, is that they carved out a modest plot of land on which Clift’s son and grandson will continue small-scale farming and they are building an enlarged farmers market where they will continue to sell fresh fruit and produce from the very land they continue to harvest.

“You have heard restaurants talk about farm-to-table ingredients? In this case, if you order a salad, you can almost sit there and watch the guys go pick it for you,” said Ceci.

Breland expects to begin selling residential lots possibly at the end of this year or early 2020. Some of the retail will likely open in April or May next year.