A recent social media post from a resident of the Edgewater community off Zierdt Road at Lady Anne Lake said, “Things That Have No End: The Universe, numbers, Pi, and Zierdt Road construction.”

Without a doubt, for those living in the midst of the “mess,” it must seem like a black hole.

But the good news is that with the lane shift from the southbound lanes to the northbound lanes on Zierdt in early September, motorists are now traversing the new Zierdt Road – marking Phase IV and the beginning of the end of the $25 million road project.

There has been a lot of frustration about the project because in 2010, it began as a $7 million widening project at the intersection of Madison Boulevard and Zierdt Road. 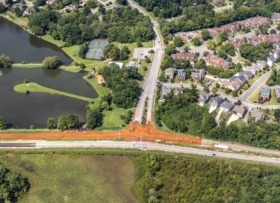 Because there wasn’t a lot of funding at the time and Town Madison and Toyota Field were not on anyone’s radar, the original plan consisted of a four-phased approach to widening the 3.5-mile stretch from Madison Boulevard to Martin Road outside Redstone Arsenal Gate 7 from two lanes to four.

Each of the four phases were estimated to take two to four years to complete.

Then, in April 2017, public input sessions resulted in the addition of a pedestrian and bike path. The 12-foot-wide multiuse path was added on the west side, changing the scope of work significantly and increasing the budget to $25 million.

As messy as it may seem, this current phase of Zierdt Road includes new drainage, curb, subgrade, paving and the multiuse path for the remainder of the project duration.

While the project has had its share of hiccups due to fluctuations in funding, according to the City of Huntsville, they have been able to make up some time during the pandemic due to the significantly decreased traffic flow.

For residents. the hindrance has been complete but, for the construction crews, residential traffic has been a hindrance.

Although it is only 3 1/2 miles long, Zierdt could not be shut down entirely because of the significant residential population along that stretch of road.

As Kelly Schrimsher, Communications Director at the City of Huntsville, points out, it is significantly more difficult to reconstruct a road when it is in use.

“When you build a new road, you keep it closed until it is finished and passable,” she said. “Or if you look at the road construction off Research Park Boulevard, that work seems to move along without much traffic disruption because they are widening it from the center median and traffic is unaffected.

“Zierdt was always a heavily traveled two-lane road with access to Redstone Arsenal Gate 7, access to the airport, a lot of residential communities, and now Town Madison with the new Toyota Field  – which was not a consideration when the project was initiated.”

All residents of the neighborhoods on Mountainbrook, Edgewater and Nature’s Way can see, however, is the demolition and reconstruction of the original southbound lanes that were the main access into those apartment complexes and communities.

But regardless of how it looks, city engineers promise the end is coming soon and it will be great.

There are upcoming changes at two exits on Interstate 565 in Limestone County, the Alabama Department of Transportation announced.

The new eastbound Exit 3 off-ramp from I-565 to Greenbrier Road and Swancott Road will open Wednesday. On Wednesday night, barriers will temporarily close the eastbound ramps at Exit 2 (Mooresville Road).

Eastbound traffic to and from Mooresville Road will be detoured to the Greenbrier interchange. The closure is expected to remain in place about one month.

The $10.3 million modifications project at the Greenbrier interchange is in final stages of work. The ramp closures at Mooresville road are part of the $14.3 million widening and resurfacing of Interstate 565 in Limestone County that began this week.

Reed Contracting is the contractor on both projects.

The I-565 project, the first major project funded by the Rebuild Alabama Act, will resurface more than seven miles of I-565 from just west of Exit 1 (Interstate 65) to just west of Exit 7 (County Line Road) after widening some sections of roadway to expand the interstate to three travel lanes in each direction. Work requiring single-lane closures may occur between 6 p.m. and 6 a.m., but two travel lanes will remain open in each direction between 6 a.m. and 6 p.m.

MONTGOMERY – Following through on a campaign promise, Gov. Kay Ivey announced Wednesday a widening project for heavily traveled I-565.

She also said a second project will expand the I-65 interchange at Tanner.

The two major transportation projects were selected by the Alabama Department of Transportation for the Rebuild Alabama Act First Year Plan 2020.

The first project includes resurfacing and revising lanes on Interstate 565 from Interstate 65 to County Line Road to provide an additional lane in each direction through the partial use of shoulders, making it a six-lane interstate. The second project will allow for the expansion of the interchange on I-65 at Tanner and widening Browns Ferry Road to be extended westward across to U.S. 31.

“While the Huntsville and surrounding areas are booming with continual economic growth, it was imperative we make enhancements to their infrastructure system for the nearly 60,000 vehicles traveling on I-565 daily. Both improvement projects will be significant strides for this area,” Ivey said. “This will improve the daily commute for several thousand drivers and provide access to the new Mazda-Toyota joint assembly plant. When we began on the road to Rebuild Alabama, I promised our state would see real results, real improvements and a promising future, and we’re certainly delivering on that.”

Both improvement projects will greatly increase access to the Mazda-Toyota Manufacturing plant development, relieve congestion on I-565 and will help pave the way for further economic growth.

“The state of Alabama and the city of Huntsville continue to be great partners to spur growth in this area, as well as across the state. We saw it when Alabama landed the coveted Mazda-Toyota joint assembly plant, and we’re seeing it today with the announcement of these two important infrastructure projects,” Huntsville Mayor Tommy Battle said. “Governor Ivey has been instrumental to our recent successes, and I was proud to support her in her efforts to Rebuild Alabama. Adding lanes to this critical corridor ensures our continued economic growth.”

Ivey signed the Rebuild Alabama Act into law March 12, after it received overwhelming bipartisan support in the Alabama Legislature. The bill, sponsored by Rep. Bill Poole and Sen. Clyde Chambliss, gradually increases Alabama’s fuel tax over the next three years.

“I commend Governor Ivey’s leadership in passing Rebuild Alabama and her commitment to keep Alabama growing,” Alabama House Speaker Mac McCutcheon said. “Additional lanes on Interstate 565 will greatly reduce congestion and aid commerce in one of the fastest growing regions of our state. I, along with my colleagues, are pleased to see such quick returns from the Rebuild Alabama Act passing.”

Beginning in January, state, county, and municipal governments in Alabama will begin to see additional revenue from the fuel tax increase of six-cents which begins in September. In fact, once the 10-cent increase is fully implemented in 2021, Madison County will receive an additional $3.5 million dollars and Limestone County will receive $1.27 million, on top of what they already receive, to be used for various transportation infrastructure projects.

For several weeks, motorists along I-565 and area residents have noticed a building going up along the freeway across the U.S. Space and Rocket Center and adjacent to Calhoun Community College.

Well, the answer is it is a Drury Inn & Suites and is slated to open in a few weeks.

The new hotel is the company’s first property in Huntsville and fifth in the state. In addition to its 187 guest rooms, the property features more than 2,180 square feet of flexible meeting and event space. 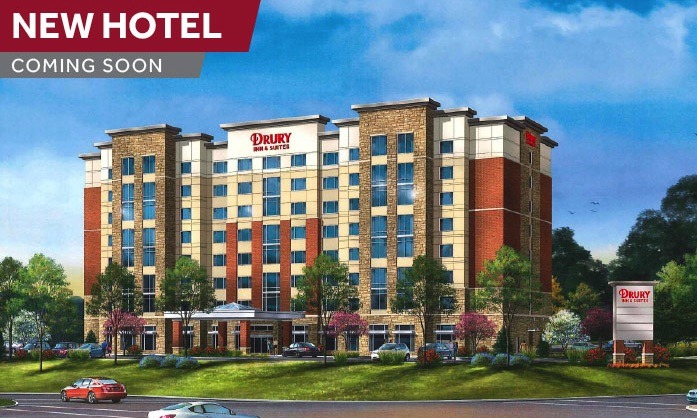 The Drury Inn & Suites Huntsville on I-565 is nearing completion.

“Kirk is a tremendous general manager with deep experience in the hotel and hospitality industry,” said Chuck Drury, president and CEO of Drury Hotels. “As we plan to open our fifth hotel in the state, we know we have the right leadership and team in place to provide the kind of friendly service, clean rooms and honest value our guests have come to expect.”

The hotel is at I-565 and Old Madison Pike. The location provides easy access to the U.S. Space and Rocket Center and the Huntsville Botanical Garden. The new hotel’s free amenities include Wi-Fi, a 24-hour fitness center, hot breakfast, 5:30 reception including appetizers and beverages, 24-hour business center and indoor/outdoor pool and whirlpool.