There may be some new life breathed into Joe Davis Stadium.

The City Council heard a presentation Thursday of plans to transform Joe Davis Stadium into a multi-use stadium, which could possibly be used to host high school football games and sporting events.

The presentation was in response to a City Council resolution in June, asking the administration to assess the condition of the vacant stadium.

The stadium opened in 1985 as a multi-use facility (football games were played there in the first couple years; the stadium has also hosted concerts) and closed in May 2015.

The estimated price tag for the transformation is $8 million; the cost to build the stadium was about $7.5 million.

“In short, the answer is, yes, we believe that taking a portion of the stadium and converting it to a multisport athletic facility is a viable option and we could consider doing that,’” said City Administrator John Hamilton.

Designs show a stadium that would seat about 6,200 people and could play host to soccer, football, lacrosse and other activities. Hamilton said the ability to hold high school football in the stadium is a big piece to the plan. 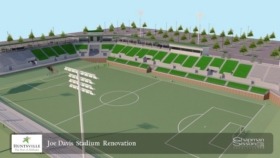 The field would fit a FIFA standard soccer field – 120 yards by 70 yards. This would allow for large soccer events and possibly a minor league soccer team at the stadium. (Rendering by Chapman Sisson Architects)

“The biggest issue that can be addressed by using the stadium is lack of high school football stadiums,” Hamilton said. “We have five high schools in Huntsville and we only have one stadium (Milton Frank Stadium) that they all share. Most every high school in Alabama has its own stadium, so you’ve got one stadium for one school. Our community has one for five, so it’s really become an issue.”

The field would also fit a FIFA standard soccer field – 120 yards by 70 yards. This would allow for large soccer events and possibly a minor league soccer team at the stadium, possibly a National Women’s Soccer League franchise or games or a National Premier Soccer League franchise. There are NPSL teams in Atlanta, Birmingham, Nashville and Chattanooga, as well as Asheville, N.C., and Miami.

The proposed renovations would include new exterior finishes and decorative fencing; new roofing; demolition of the skyboxes and renovating the press box, restrooms, locker rooms, concession stands and offices. The electrical system, fire alarm system and elevator would all be upgraded and repaired. Chapman Sisson Architects provided the existing Architectural Assessment.

“What we’ve presented is very preliminary right now, so we’d have to bring a full design contract and turn the concept into something that could be built,” Hamilton said. “That would be the first significant step.” 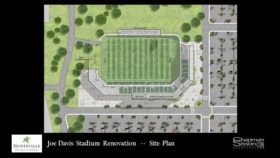 According to the assessment by PEC Structural Engineering, “the overall concrete members appear to be in excellent condition.”

Mayor Tommy Battle believes repurposing the stadium could be another home run for high school sports.

“I was proud to be part of city government in 1984 when we built the stadium,” he said. “And I’m proud to present this effort to restore the old Joe into a community asset.”